Experiences Being a Passenger on a Motorcycle or Scooter 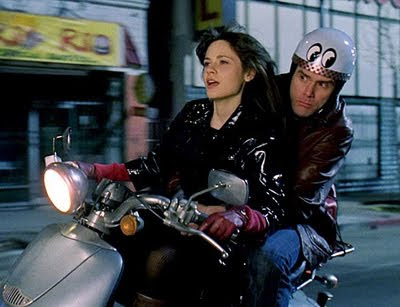 For many motorcyclists, being a passenger may be embarrassing, and even worse on a scooter than a motorcycle. Jim Carey tried it in the movie "Yes man" as shown in the picture. The title "Yes Man" refers to the plot of the movie where he was under some kind of spell where he had to say Yes to all kinds of terrible things, and of course being a passenger on a scooter driven by a girl was one of the worst. You can pretty much see the whole movie in 2 minutes here with the preview More of the scooter ride here

Driver (Zooey Deschanel): Am I going too fast for you?

Passenger (Jim Carey): No, go faster. That way when we crash I'll die. I don't want to be kept alive artificially

Driver (as she takes off at very high speed driving with one hand): Hold still, I'm taking a picture

So today Mary Ann wanted to drive her scooter down to my mother's and she wanted me to come as passenger. I said "Yes." and now I am going to tell what happened and to hopefully help others prepare for such events.

The first thing I decided to do was check her tire pressure. It's a 300 km round trip, and much of it will be on the freeway. So good thing I checked, because the back tire was low.

Next, something I did that was stupid. I wore just my jeans and did not put on my leather overalls. Starting out, it was 18c and sunny, so I thought it might be too warm. Mary Ann wore her leather pants, and as a rule it is best for a passenger to dress better than the driver. And at the end of the day, the temperature dropped to 13c, the sun was down, and I was getting cold. From experience I have found that often the driver is better protected from wind than the passenger, if there is some sort of windshield and fairing at the front.

Rounding our first traffic circle heading out of town, it seems Mary Ann has picked up the pace a few notches since the last time I rode with her. I began to notice her speed a month ago as I followed her around this particular traffic circle, loudly scraping the floorboards on my Kawasaki Vulcan. This time, with me as passenger, taking corner at an alarming speed, it was her centre stand dragging. We discussed this situation at the gas station next to the circle, as this had never happened to her before.

Let me make this observation to testosterone addled guys who ride their bikes faster trying to scare their female passengers. Don't do it. It is already scary enough on the back of a bike without you trying to make it more scary. It is far less scary to be the driver, so it's not like you are being brave or anything. Just try to remember, it is not as much fun being a passenger as it is being the driver.

If you, as a passenger, weigh near 200 lb., you are going to be affecting the performance of the bike, so pay attention. In a fast corner, you should lean to the inside. For example, in a left curve, look over the left shoulder of the driver. That way you help keep the bike more upright, and prevent stuff from dragging on the ground. Apparently this is counter intuitive to some people, who think leaning away from the curve will help by making the bike stand up straight. That's not how it works. Both the bike and the passengers must lean at a certain angle at a certain speed. The fact is, if the rider and passenger together lean more, the bike does not need to lean as much. It's simple physics, and that's how you minimize dragging stuff on the ground.

A passenger needs to have some means of communicating with the driver. Shouting alone only works in movies, as the bike is generally too noisy. You need to communicate important ideas such as wanting to stop or slow down. Most passengers intuitively grasp that hitting the driver will communicate this idea. But I also find that I need to communicate the idea that "you are too close to the centre line". Maybe a typical passenger would not have these needs, but as a long time motorcycle rider, I do. So I use a knee to to drop the hint to "move over". Why does she drive so close to the lane markers? I can only assume it is something taught in motorcycle school these days, (which is questionable) that you should never ever drive in the middle of your lane. Mary Ann has absorbed this idea and avoids the middle of the lane the way I try to avoid going off on the shoulder, or the way I try to avoid wandering under the wheels of a passing truck. The whole problem with motorcycle school is that of balance of emphasis. When explaining dangers to rookie riders, many instructors skim over dangers that are obvious to experienced riders, and dwell on unusual dangers that are not so obvious. Unfortunately, that leaves the rookie drivers with a kind of warped sense of which dangers are more important on the road. For example, on some busy freeways where it never rains, oil builds up in the centre of the lanes, and the lanes are very wide. Hence stay away from the centre. In other places, like the 401, the lanes can be quite narrow with a high percentage of truck traffic, and furthermore the centre of the lane is clean. So it is far more dangerous to be hugging the dotted line, especially with cross winds. And so I get scared sitting behind her as that dotted line flashes by under my left foot, but I can't explain all that except by a knee to the kidney.

It's not all bad, being a passenger. It does give you a chance to look around more, and especially to find out what problems a passenger has to deal with for next you time have one while you are driving. When you are warm, and comfortable and not scared, it is more fun to be a passenger than to bungee jump off the Brooklyn Bridge.
Copyright the Lost Motorcyclist