Travelling Abroad and Dealing With Theft 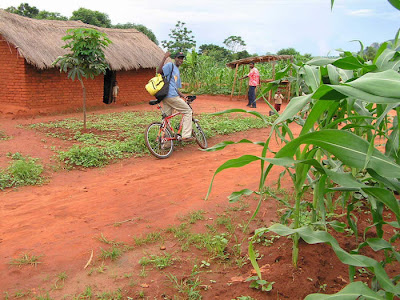 I feel a need to comment on this particular statement about Sierra Leone. I came across this comment on the internet by Joy M. Hathaway, from Airway Heights, WA.

She starts out by stating she was a Peace Corp volunteer in Magburaka, from 1985 to 1988, and makes a few general comments, but this is the one that got me thinking.

"One of the cultural practices is teaching the boys and girls how to steal. Looking from the outside in, Western cultures teach children it is wrong to steal."

I am actually quite shocked and horrified that anyone would make such a derogatory statement about any country in the world, and this is especially disappointing coming from a Peace Corps volunteer in the same town I was, although not at the same time.

Theft does take place in Sierra Leone. Theft is a bit different in a wealthy country, and a poor country. In a wealthy country like the USA, for example, you would not leave a laptop computer sitting unattended and unsecured on a desk in a classroom day after day, and expect it to be there two weeks later.

A poor country like Sierra Leone is no different to the USA, if you make an allowance for pricing. Let's assume a piece of chalk in Sierra Leone is as valuable as a laptop computer is in the USA. If people are willing to sit all day in the market in the hopes of selling an orange for one cent, (not a profit of one cent, a total price of one cent)  obviously, some may be tempted to casually steal an unattended piece of chalk, and see what they can get for it.

And for something more expensive, they may be willing to hatch a fairly elaborate scheme to steal it. The amount of planning to rob a Brinks truck in the USA may be used to plan the robbery of a mosquito tent or a blanket in Sierra Leone.

I don't know what negative experience gave her the idea that stealing was "being taught to boys and girls", but my own experience in Sierra Leone was that yes, I had some things stolen while I was there. And in Canada, I can recall once or twice having a bicycle stolen, and almost all our neighbours in Canada have had break-in robberies, but not us. (I know what you're thinking, but honestly, it was not me).  Also, there is some theft of office supplies, and hardware and building supplies in various trades. But in a country of vast excess wealth, this petty theft is not crippling to the economy.

I try to take appropriate measures to lock up things that I think may attract thieves. The poorer the country, the more things need to be locked up. In Sierra Leone, things were stolen that no Canadian thief would ever bother with. Just last night, for example, Mary Ann and I were walking through the mall and saw an entire box full of chocolate cookies abandoned on a bench. Because it was in Canada, nobody yet had bothered to pick it up. Not so if there are starving people all around, and I am not saying people in Sierra Leone are starving, but they are not as well fed as Americans.

At one party I attended in Sierra Leone, we were having chicken wings, and the cook, who was Sierra Leonian, asked if he could have all the leftover bones to take back to feed his family. We were probably going to throw them out. And if we had thrown them out, would Joy Hathaway call it "stealing" if somebody came along and took them without permission?

I am pretty sure that parents do not teach their children to steal in Sierra Leone, and people sometimes get beaten up pretty badly when they are caught stealing. That's because, in Sierra Leone, people watch out for thieves and catch them and punish them without bothering to dial 911 and wait for the cops. And they also don't take the attitude that "it's none of my business" if somebody is observed stealing from somebody else.

Let's contrast that attitude to a story that appeared on TV a few weeks ago, about somebody being mugged on the Toronto subway system, where none of the other passengers tried to stop the robbery. That type of thing would not happen in Sierra Leone, because it's a different culture. Not better, not worse, just different. When you travel to other places, you need to try to understand and respect the culture.

The first thing of mine that went missing when I started teaching in Magburaka was my new umbrella. I had left it in the staff room, and it was gone by the end of the day. A few days later I found out who the thief was. You guessed it, the thief was a Peace Corps Volunteer. Was there an explanation? Of course, and I would never use an incident like this to imply that all Americans teach their children to steal. Unless there was proof, such as a hidden video or maybe a collection of handouts and teaching materials to substantiate the claim.

Now let's look at this statement. If "Western cultures teach children it is wrong to steal", does that mean the USA is going to be giving back the land to the Indians? Or that back wages are going to be paid to the slaves?

Picture: A village in Sierra Leone.
Copyright the Lost Motorcyclist