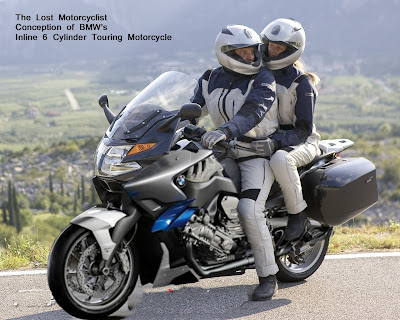 It is typical of all those who tempt fate. No sooner have I written the ultimate ode to keeping the old bike, than BMW promises to deliver the bike that I must own one day.

From a BMW press release:

"The new BMW straight-six will further expand the K-Series in the foreseeable future. The first model to be introduced will be an innovative and luxurious BMW touring machine."

Assuming this bike arrives priced to keep the riff raff away, as BMW prefers, I will probably start buying my lottery tickets now.

It sounds like a cross between my old K1100LT, which is the bike I owned the longest and drove furthest, and my 6 cylinder Honda CBX, which is the bike I traded in to be able to afford the BMW. As I recall, I got $2500 for the CBX in 1992, and today they are worth approximately twice that much.

Soon we will have a BMW touring bike that has an inline six like the Honda CBX.

Before BMW gets too far along in their plans, I want to give them a little advice. Don't make it look too ugly, I have some tolerance of course, but I also have my limits. The K1300GT looks OK so don't stray too far from that. Next, keep it under 700 lbs. I know that's going to be difficult with a 6 cylinder bike loaded with every imaginable piece of nonsense. Then let's not forget some of the basics. An electrical windshield, handlebars that adjust up and down (again like the K1300GT), and weather protection. I guess ABS brakes are unavoidable, but do we also need power brakes? And I would like adjustable stiffness in the rear suspension, while driving if possible. And a full tank of gas has got to go at least 300 km. Finally, I'm not sure if any amount of desire is going to get me over $30,000, so maybe get rid of some the stupider accessories such as a radio/8 track player. But keep the saddlebags (of course you will, you did say it would be a touring bike, right?).

And whatever else you do, I will not buy any bike that I am afraid to drive down a dirt track to a campsite.

Picture: Just to keep the BMW designers from messing things up too much, this is what the bike needs to look like. You may use this design without charge, but I would appreciate being credited in your publicity. I photoshopped this design by combining the front wheel and engine of the Concept 6 with a K1200GT. I will leave BMW designers the details to work out for themselves.
Copyright the Lost Motorcyclist