What Kind of Bike Would T.E. Lawrence Ride? 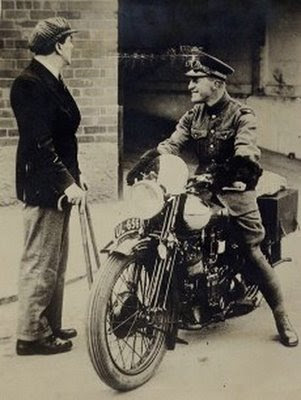 The Brough Superior is one of the greatest legends in motorcycling. It was called "The Rolls Royce" of motorcycles, admittedly, by its own advertising staff. But apparently they didn't get sued by Rolls Royce, so that gave them a certain cachet. It was also owned and driven by "Lawrence of Arabia", who had several. And it was the bike he crashed when he died.

What kind of bike would T.E. Lawrence a have picked today that would be the equal of the Brough Superior of the thirties?

A few years ago, at the height of the custom bike craze, Jay Leno, was given a bike by the Teutle family. They had their own reality show on TV, which I used to watch sometimes, and in each episode, they built a custom chopper. A chopper is a unique one-off custom bike that has a cruiser style, with feet forward, low seat, long fork and handlebars. Lots of fancy paint and chrome.

They asked Jay what he wanted, and as a bike collector, he asked for something like a Brough Superior. They produced a chopper and unveiled it in front of Jay on TV. Jay's expression was priceless. Whatever he was expecting, I don't think it was a chopper, but he should have known better. A chopper is the exact opposite of a Brough Superior, and understanding that helps to understand a what it takes to be a modern successor.

The Brough Superior was a very expensive bike. That's because it was made with the best of everything, engine, frame, brakes, seat, instruments, suspension. All the best stuff available at the time. That's why it could easily do over 100 miles per hour, a feat that was rare in the 1930's.

The second characteristic was high speed capability, and the Brough would not sacrifice speed for mere comfort. The Brough treated the rider with enough respect that he (in those days, I guess it was always a he) would be comfortable, but he was expected to be in good shape physically. The Brough's main objective was not to coddle the rider in every luxury. Although it was a bike built for an officer and a gentleman, he was expected to drive the thing himself, possibly at very high speed, and enjoy doing it.

Rider comfort was somewhere between not being coddled and not being tortured. For the equivalent of a Brough today, we are probably looking at some kind of expensive, fast, sport touring bike. Pure sport bikes are far too uncomfortable and impractical to be a Brough, while luxury bikes are too heavy and comfortable.

The reason I don't think any of the current sport touring bikes can fill the Brough Superior's shoes right now is that none of them stand out from the pack. All of them are developed by marketing people who say you can't cost too much or do anything really different. I'm not saying that modern sport touring bikes are no good, because any one of today's sport touring machines is a hundred times better and faster than a 1933 Brough Superior. What's missing is the quality that elevates the bike into a unique position where everyone agrees it is simply the best sport touring bike in the world, and everybody else gives up. 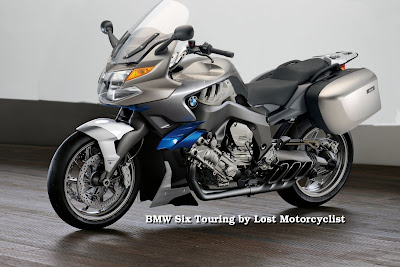 So this is why I think the predicted new BMW inline six sport touring bike might be the one, even though it is not yet built. BMW is after all, the original sport touring bike, and BMW is still leading the way in redefining the type. The others are the followers. BMW has promised the first bike with the inline six will be a luxury touring model. Well, that one is probably just going to be another luxo-barge designed to coddle the rider, and surround them with every gadget the mind has conceived. But inevitably BMW will come out with a six cylinder sport touring model. I hope it will be worthy of the comparison to the Brough Superior. Jay Leno would probably have one. And so would Lawrence of Arabia, if he was still around.

Second Picture: My hi-res photoshop conception of the inline six BMW sport touring bike. Click on the picture to see it in a larger size.
Copyright the Lost Motorcyclist