Republicans in the Movies: Commando (1985) 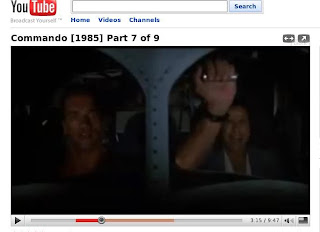 Last night I watched a movie on TV that was not just stupid, but stupid without pause or letup for the entire show. Not that I didn't enjoy it, as it did have a few elements that I like, and there is also the interest after a while in how long can they keep this up, or even top it.

The movie was Commando (1985) with a young looking Arnold Schwarzenegger as hero, and his female sidekick Rae Dawn Chong. The basic plot is Arnold (Johnny Matrix, I believe that is one of the earliest uses of the word Matrix in popular culture) is recruited by bad guys (you don't need to know why or who) to assassinate someone (again, who cares?). They kidnap his daughter to ensure his cooperation. Arnold does not really cooperate, and at one point commandeers a random car driven by Rae Dawn (Cindy) which he proceeds to demolish bit by bit, starting by ripping out the passenger seat with his bare hands so that he has enough room to sit. They take off in pursuit of bad guys, so you have more car chases (that was not the first one, or the last) and as Arnold says "Then all hell breaks loose" and he ends up killing over a hundred people. I lost count, partly because it was not clear, for example if the guy whose arm he cut off actually died once the camera moved on to the next person to be killed.

Rae Dawn is at first apprehensive of this crazy guy who grabs her from behind in her car in a parking garage, and tells her to drive somewhere, and he's not going to hurt her, and to trust him, but he can't tell her why. But then as the mayhem unfolds and more and more people end up dead including an entire regiment of mall cops, her attitude softens, and she starts to help him out by learning how to fire a rocket launcher, steal another car, rescue Arnold from police custody by shooting the rocket launcher at the van taking Arnold away, and then piloting an airplane she has never seen before (she is also a pilot).

The high point of the movie came for me with Arnold and Rae Dawn in the float plane. Rae Dawn is the pilot, as Arnold does not know how to fly a plane. As they struggle to take off under a hail of bullets (the only way to fly), Arnold sees a large boat ahead of them and says says "watch out for the boat" Rae Dawn "EEEEK We're not going to make it". Arnold say "Yes we will!". I did not have time to think: does he know the lift properties of this plane, the weight of himself plus all the weapons he's carrying, the fuel load, the height of the ship, the wind speed and direction? No he didn't know or care about any of those things, he just reached over and pushed the throttle all the way to the max.

How stupid is it for Rae Dawn, supposedly a trained pilot in this film, who is trying to take off and get over some obstacle, to not have the throttle pushed all the way to full power?

The same theme crops up again and again. For instance when Rae Dawn picks up a rocket launcher and aims it at the police van, she has it backwards and takes out a building behind her on the first shot then for the second shot she turns it around and wipes out the van, miraculously not killing Arnold who is sitting in the back, right where the rocket hits. He asks her "How did you learn that". She answers simply "I read the instructions". So the "book learning" that does not say which direction to point the rocket launcher, and it probably should also have said "Caution: if you point it at the back of a van and fire you may kill everybody inside"

Think of Arnold Schwarzenegger's political career. He decides the Governor of California does not know anything about running a state, so Arnold takes over, with the idea that his common sense will prevail, just like in the movies. And surprisingly, a lot of people agreed. I guess he has not done too badly, but California is closer to being bankrupt now than it was when the girly men were in charge. That's the difference between being macho but ignorant in reality and in the movies.

I have a brother-in-law who is an airline pilot. Some years ago, on a family outing I was in the car driven by a non-pilot brother in law, with the pilot driving the car behind. As we took off at moderate speed, the car behind fell further and further back. Both of us were wondering how he could ever fly a plane if he was so reluctant to mash the accelerator pedal in an SUV. So I asked him when we stopped "Is there ever any situation when taking off with a plane where you do not use full throttle?" He answered, yes, lots of times. OKayyy, so that would be what I call "counter intuitive".

The entire movie is on Youtube. Beginning of part 4, Arnold grabs Rae Dawn from behind. "Don't move, get in the cah!" Rae Dawn "You said don't move!" Arnold "Do it!"