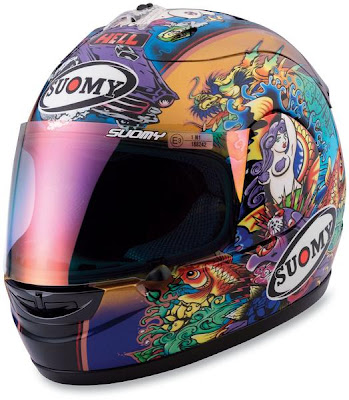 The simple motorcycle helmet has now crossed the line in my opinion. I was looking for a helmet at the motorcycle show. I wanted a helmet with one of those new inside "sun visors" that slide down in front of your eyes or retract with a lever on the outside of the helmet. Otherwise I just wanted a new helmet that fit and was much like my old one. I found a series of problems.

First, it is hard to figure out which helmets actually have the flip down sun visor, as they tend to be displayed with the visor retracted, so you do have to look long and hard, and it really does not seem to speed things up all that much to ask for help.

Secondly, the graphics on the helmets are outrageous. Yes, you can get a plain helmet, say black or silver or flat grey. But very hard to get a visible plain colour like yellow or white. I think the helmets at the show were possibly selected to just be as fancy as possible, or maybe it was all the designs that they simply could not sell in the shop, and the vendors hoped that they would sell better in a show atmosphere. I don't have the time or space to show all the helmets here, but you could google images of motorcycle helmets, and get an idea of the variety. Funny thing is that the ones at the show are often worse than what I could find on Google. You have first of all the pink ladies helmets, apparently they are selling a lot for women, and it shows. But sometimes the colours are OK but the pattern is very feminine - delicate and lacy, kind of like lingerie. OK to look at from a distance, but I don't want it on my head. Now you have helmets that Mary Ann would object to, which includes patterns with such names as "wicked women", "pin up", Devil Girl" and any pictures of not fully clothed women, or any women at all, other than Mother Teresa.

There are also many zombie like helmet designs with graphics of death heads, and hanging out eyeballs, which I reject. Next up we have the patriotic helmets. Not just the classic Easyrider stars and stripes, but eagles, twin towers falling, and other macho murals of mayhem. But all are American, not Canadian so I cross them off the list.

Some manufacturers are starting to put sayings on the helmets like "I never ride faster then my guardian angel can fly". If I want to put some obnoxious saying on my helmet, there is a guy in the next aisle selling stickers at $2 a pop with any kind of message I want, and I don't want yours. (Oh yes I forgot, putting as sticker on the helmet means it won't protect you in case of a crash.)

The variety of helmets is truly bewildering now. Everything from half shell skid lids that never passed a DOT test (but you can buy the DOT stickers in the next aisle in case you are hassled by the fuzz). To full face helmets that have removable or lifting chin bars.

Before I declare this rant over, I forgot the prices. There is a huge variation, from $80 to over $1000 just for full face helmets for example. Check out the price before plunking a lid on your head, because at $1000 you don't want to drop it. Did I forget to mention one drop of a helmet, and you are supposed to replace it? Also if it is more than a couple of years old, you are also supposed to replace it.

With all the expense, and constantly replacing helmets with new ones, you would think a helmet would always protect your head in case of a crash. But no, according to statistics, a helmet will only prevent about 1 out of three fatal head injuries.  So the rule is still "Don't crash". But the helmets will help you look good look great not doing it.