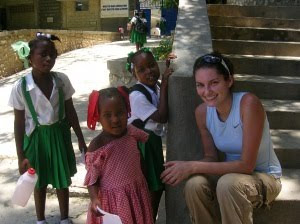 It is pretty overwhelming to see what is going on in Haiti. But absolutely revolting to see the heartless attitudes some people take toward this tragedy. I especially despise Rush Limbaugh saying that nobody should give a penny to the Haitians.

I saw some comment like:
"What do they expect, they live in little tin roof shacks, of course they are going to be killed in an earthquake"

Fact: You are actually far less likely to die in an earthquake when you live in a miserable shack held up by broomsticks and twine, than you are to be killed when a larger multi story cement structure, probably built during the American occupation, collapses on your head.

Pat Robertson made a lot of errors in his condemnation of Haiti. The "Pact with the devil" they made to get free from France? I have gone over the pact with the devil contract before, it does not hold up to any scrutiny. I don't expect any truth from someone who believes in Adam and Eve anyway. But please, they were not fighting to be free of France. They at first wanted to remain a colony of France, and only to be free of slavery. Toussaint Louverture, their early and successful leader, wanted to negotiate for the end of slavery and remain a colony of France. But he was captured at the official negotiation, by the French, and sent to France where he died of disease in captivity. He was actually lucky, almost every other leader who stood up to the French was burned alive or tortured to death upon capture. It was only after these talks broke down, that the Haitians were forced to choose new leaders and decided to fight again for complete independence, against the treacherous French.

Another big question Pat raised, why are Haitians so poor, when right next door in Dominican Republic people are wealthy and happy? He reasons it's all about the "pact with the devil" which I actually find an improvement over many of the racist slurs other people make to explain the poverty.

Why is Haiti poor? After Haiti's independence, the French refused to trade with Haiti, and no other country would or could trade with them either. Either for revenge, or because of the so-called pact with the devil, of for pure racism. Anyway, no trade, no money. After a number of years of near mass starvation, the Haitians negotiated with the French, who were also hurting a little by this time, as Haiti had been a major source of wealth for them. The French offered a deal, take it or leave it, that the Haitians would have to repay France for every bit of land they took (the entire island of Hispaniola), and the full market price for every slave on the island who was freed by the rebellion, (almost the entire population) and all damages cause by either side in the rebellion. Ask yourself how this compares to the terms England gave to America after the war of independence. You may have to read up on that history again, but I'm sure you will not find reparations or trade embargoes. The Haitians were saddled with paying off a staggering debt, including extremely high interest rates from 1826 to 1879. So don't make disparaging comments about Haitian poverty if you don't know anything about their history.

Is there more? Of course. The entire Island of Hispaniola, for a time was under one government, but in 1844 considering the burdensome deal made with France, half the island split away, leaving the people in the Western half of the island (today Haiti) to pay the entire war reparations to France without the help of the Eastern half, now called Dominican Republic. That's the "wealthy" part that Pat Robertson compares to Haiti to "prove" there was a pact with the devil. Apparently, in Pat Robertson's eyes, poverty proves you have a pact with the devil, even when people are taking money from you unfairly. And by the way, the Dominican Republic is not actually paradise on earth either.

Another myth to dispel is this: That the people of Haiti are congenitally incapable of running a decent country. Either through stupidity, or pacts with the devil or whatever, the myth is, the Haitians just can't do it. Well just read up on their history, and you will find there was a period of time (approximately 1867 to 1911) when the Haitians actually were turning their little country into a nice place to live, with a growing intellectual class, and with arts and literature. Peace and stability were the norm. But Germany saw Haiti as a potential colony in about 1911, and the Americans retaliated by invading and brutally occupying Haiti. Since then it has been either outright American control, or American puppet dictators, more or less steadily. Later in this dictatorship phase (especially in the last 20 years), many of the most wealthy and educated Haitians emigrated to Canada or the USA, leaving the rest to deal with it. Not the best of conditions to try to run a good country.

Then this earthquake, and all of a sudden racists pop out of the woodwork with their opinions that do nothing but show their own ignorance and lack of either education or heart. 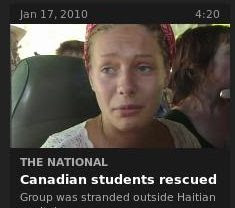 Now I see a video on CBC News  of a Canadian teenage girl in Haiti crying. Why? Because she and a group from her church were in Haiti during the earthquake, on one of these volunteer trips, doing some humanitarian work while visiting a developing country. She was crying, overcome with emotion of seeing all the dead bodies, hearing the screaming people trapped in the buildings, and yet in the middle of all this, their Haitians hosts were still doing their very best to make sure the Canadian guests were safe and taken care of.

How about if we just give these people a break for once?