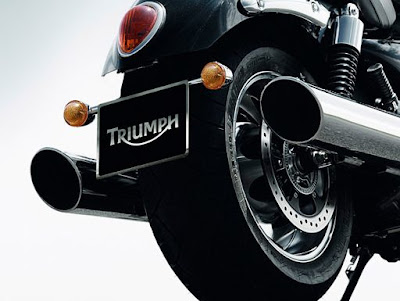 Motorcyclists are much more involved with the sound of their machine than any car driver except maybe a race car. That's because the engine is more exposed, and so is the rider. But even so, at highway speed, the sound of the wind can drown out almost any normal engine noise.

Whether or not the sound reaches a painful and damaging level can depend on the condition of your ears, your age, the type of helmet you wear. The single biggest factor on your hearing is the type of earplugs you wear. Not only do earplus lower the sound level, but they tend to block out high pitches noises most, and so any ride will sound more mellow with earplugs. I have worn earplugs for many years, and I almost can't ride, even around the block, without them any more. Not just for the noise reduction, but hearing the different sound of the engine without earplugs makes me think something is wrong with it. One caution with earplugs, they do tend to make you ride faster, you have to watch your speed more. But they can save your hearing so that when you're old you will be able to say more than "WHAT??".

Windshields and fairings can reflect and amplify the unpleasant noises coming from the engine.

Riders generally do not like the mechanical noises that come out of their engines, such as rattles squeaks, knocks, and scraping noises. They don't mind power noises that come from the exhaust, and some riders get a real charge out of producing the loudest noise around. Consequently, one of the first modifications many riders do is to make the exhaust louder. I have a more modest nature, and I wear earplugs, so the factory exhaust usually sounds OK to me. The only time I have tried to "open up" an exhaust was when I had one bike whose exhaust was truly strangling the bike to the point that it could hardly run. That will almost never happen unless you have a two-stroke motor, and hardly any bikes are made like that any more.

It's not just the engine noise you hear, there is also gear noise, usually a high pitched whine. Some people don't like it. Straight cut gears tend to be worse, while angle cut gears are a bit more silent. Various other parts of the drive train can also add to the sounds, like a chain or even a belt.

The noise of the engine can have a powerful effect on the driver. Many noises make the engine sound like it is having a breakdown, which is unsettling. Even worse is a new sound that the engine starts to make. Or even an old sound that the engine stops making can be worrisome. The flip side, is when the engine is making a nice steady sound, it can give the rider a sense that all is well in the world. Well it can for me anyway.

In the end, it is a combination of many things that give the rider the final audio experience of riding.

I would say that of all my bikes, it's probably the Vulcan 900 that has the most pleasant reassuring sound. It starts with the V-twin, single crank throw layout, which tends to make a rhythmic slightly off beat exhaust sound that helped to popularize Harley Davidsons. Now the Harley Davisons are all made that way, and the company would probably have a hard time selling any other kind of engine because the sound is such a big attraction to the make.

This is something most Harleys don't have and it is another part of the Vulcan's appeal. It has water cooling jackets, which muffle less pleasant the internal commotion of the engine.

The worst sounding bike I ever had was my Yamaha 250. When it was running right, on the open highway it sounded happy enough. But at idle was another story. Two stroke engines are notorious for their frantic, rattly high pitched exhaust. The sound can drive some people mad. When the engine was idling, you always wanted to shut it off, thinking it was going to blow up any minute and scatter parts far and wide. Well at least they were going to be cheap parts, and not that many of them either. There's always some consolation.
Copyright the Lost Motorcyclist