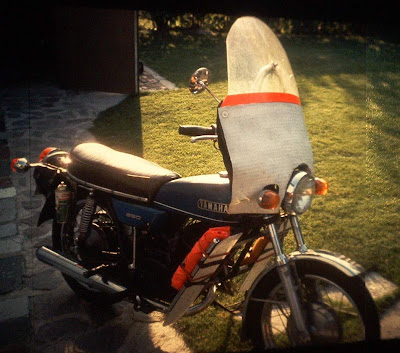 I like some weather protection on my motorcycle. If necessity is the mother of invention, then Canada is a great place to invent stuff to keep you warm. Where I was living, in Sept-Iles Quebec, you could freeze even in the middle of summer if you got near the ocean. The only road out of town was near the ocean, for about three hundred miles.

The first piece of equipment was a windshield I bought very soon after I got my Yamaha 250 in 1974. I considered it very successful, and so I decided to go further. In an attempt to block the cold air coming in under the windshield, I got some rubber carpeting, cut it to the right shape and screwed it to the lower edge. Not too pretty, but I could feel a difference.

My second effort was to install leg shields, which I made out of plywood and a broken hockey stick. They didn't look too bad once I painted them. They protected my knees and feet from the wind blast. And yes, even a Yamaha 250 can give you a blast of air as it has a top speed of about 145 kph.

After several years, a small tip-over broke my windshield. But by that time I had disposable cash, so instead of screwing and gluing, I decided to buy one of the fashionable handlebar fairings of the seventies. It was made of a white fiberglass lower piece with a hole for the headlight, and a clear plastic windscreen at the top. On my last big trip with this fairing, I was 30 years old, and I discovered a flaw. It created a backdraft that pushed my head forward, and on long trips it caused a pain in my neck that I did not notice when I was younger. So age was starting to play a part in my motorcycling plans for the first time.

With my next motorcycle I was unable to find a windshield that worked. The bike was a much larger Honda Silver Wing 500. Size had something to do with the problem, as the handlebar windshield needed to be mounted much further forward to go in front of the handlebars, and this distance allowed the wind coming off the windshield to break up into severe turbulence before it got to my head. My solution was to cut off the top of the windshield, which didn't really work, so I kept cutting it shorter until there was nothing left, then it was comfortable again. But I was back to being cold.

Around 1984 I decided to put some big money into the problem, and I paid over $1000 dollars for a genuine Honda Interstate frame mounted fairing, similar to the one on the Honda Gold Wing. Unfortunately, although it did protect me from the cold and rain, the backdraft returned, causing severe pain in my neck and shoulders. I continued to experiment with spare windshields, cutting them to different shapes, and cutting various holes in them with little success.

The same problem dogged me for several years, and onto another bike, my Honda CBX, which was a 6 cylinder sport touring bike with a frame mounted sport fairing. My neck was hurting so badly that, now in my late thirties, I was almost considering giving up on windshields. At least I knew what the problem was, it was all about the back draft off the windshield. No windshield, no problem with my neck. But I would have severely cut back on riding without the protection of a windshield.

But then in 1992, BMW came out with an electrically adjustable windshield that looked like it might work. It was the first electric windshield that could adjust both the height and angle, which by now I knew was important. A lot of people I talked to at first thought it was just a gimmick and would be soon forgotten, but today all sport touring bikes have copied this same basic design.

I bought the BMW. I have heard of a lot weaker excuses for getting an expensive new bike than to relieve neck pain. I still couldn't help experimenting with the new windshield, especially since I had a lot of left over clear plastic in the garage. I finally settled on a design that was more like an adjustable air foil. Not only did it eliminate turbulence problems, but it produced very little backdraft. And because the angle was electrically adjustable on the fly, I could also use it to cool off or warm up.

Finally my neck problem started to go away. By this time I was in my mid-forties. The BMW setup was so good I kept the bike for 15 years. The windshield didn't look good, but I didn't care. The BMW also had good hand protection, and excellent leg and foot protection.

It was a sad day when the BMW gave up the ghost after 150,000 km. I pushed it home, and within a couple of days had bought a new 2007 Kawasaki Vulcan 900 with a factory windshield. I was in my late fifties, and I had almost forgotten about the neck problems.

The Kawasaki Vulcan had a huge windshield. It was my first cruiser style bike, and seat was extremely low, which meant I could look through the windshield for the first time. Then the long, wide handlebars and feet-forward position meant that I could make good use of a rider backrest. Typical of most cruisers, it did not have a speedometer mounted in front of the handlebars, which allowed the handlebar windshield to be mounted a little closer to the rider. Whatever the reason, the neck pain has not reappeared.

After a little experimenting (of course), I found that I was satisfied with a slight tilted back position, so that I could see just barely over the top of the windshield. So far, in the 30,000 km I have done on this bike, the neck pain has not returned, but I can also remove the windshield if I need to, with four bolts. And with a nice soft pack on the back seat, to lean on, I can be about as comfortable as in my car.

Picture: My Yamaha 250 in 1975, with windshield, carpet fairing, and hockey stick leg shields. I also have attached to the bike (more or less permanently) a can of chain lube, rain outfits, and a bicycle tire pump.
Copyright the Lost Motorcyclist