The Joy of Driving 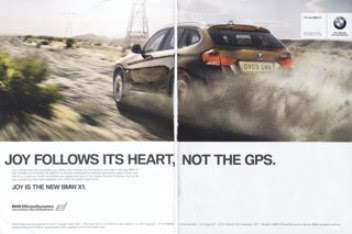 Last year BMW had an ad campaign about the joy of driving. I wanted to know what they meant. For some people, the joy of driving is actually not driving. They get joy from playing the stereo, talking on the phone, drinking coffee from the many cupholders, and admiring the expensive looking plastic on the dashboard. That may be joy, but it is definitely not about driving.

When I first started driving, just being behind the wheel, and being able to drive was all I needed. The car could have been one of the most miserable pieces of junk ever produced for sale in Canada, and it was. But then it didn't matter to me at all.

Today, after driving so many cars for hundreds of thousands of miles, that joy is worn very thin. Now, the reason I may get joy from driving depends on my past experiences.

My first long distance car trip was across Canada in a '56 Chevy with very loose front wheel bearings. After that experience many years ago, I never fail to appreciate a car that goes where it is pointed. Part of the same experience was a looseness in the steering gear, which actually was hard to detect because of the wheel bearings. But after I tightened the bearings, there was still about five inches of play in the rim of the steering wheel. The feel of driving a car with a combination of loose wheel bearings and very sloppy steering gear can only be described as like driving a normal car at about 500 km/hr. It forces you to pay attention every second. No time for checking the rear view mirror when either one of the front wheels may at any time suddenly head off in their own direction, and you have five inches of hand motion to cover before you even begin to take control over the errant front wheel.

So now I love a car that needs very little effort from the driver to keep it pointed straight. I like steering wheels with little or no play in them, and tires that refuse to wander off on their own. That for me, contributes to the joy of driving. And it's one of the reasons I really like motorcycles.

Another situation from a few years earlier, also put me off cars with steering problems. My younger brother had bought a weird French car, a Simca. He had been working on the steering, and wanted me to take it out for a drive to test it. So I drove it down our street, which happens to be a half mile long curve bending gradually to the right (in the direction I was going). Everything seemed OK until I tried to take a left at the end, and the steering wheel would not turn past centre. It could only go straight or right. I expressed my dismay to him as I went by my corner, and he said the problem was the tie rod that sometimes hit a suspension member. I guess with both of us in the front seat it might have compressed the suspension enough to cause a problem. But if we went over a bump, the steering could suddenly free up and I could get the wheel past centre to steer left. This was going to be a problem to get home, as the road back now curved very gently to the left. We got it turned around and also got the steering wheel to the left side of centre, and I had to keep it there. If I let it get back across centre, it would refuse to go left again until we hit another bump. Our trip home was kind of erratic, as the wheel got stuck three or four times. It's actually very hard to drive in such a way that you do not move the steering wheel across the centre line. The lesson learned? Don't wait till you start driving to ask the question "What's wrong with the car?".
Copyright the Lost Motorcyclist