Drivers Are Not All Blind 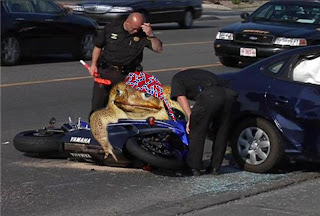 Ride like everyone is blind and out to get you. That's good advice, but with time you are obviously going to figure out this is not really true. And then you will need to refine your mental image.

First, lets assume the truth is most drivers are sighted, although sometimes there is a time lag before they "clue in" and recognize a motorcycle as another vehicle on the road. Until then they may see the motorcycle, but this unusual sight is placed mentally in the same class as unicorns or dragons. Once their brain responds correctly, after a lag of 1 to 5 seconds usually, they realize that this object obeys the same rules of the road, and laws of physics, as a car, and they react accordingly.

Does this knowledge have any implications for your driving strategy? More often than you think, you are in a situation where a car driver has less than a second to recognize your motorcycle. Let's say you are stopped in the middle of a road, waiting to make a left turn, a big SUV is approaching from behind. At the last second, the SUV swerves around you, but then you realize there was a smaller car tailgating that SUV. That tailgating driver has less than a second to recognize you as a vehicle on the road. Other situations will occur that are more difficult to predict, such as a driver who is fiddling with their collection of CD's, then looks up at the last minute to see where their car is. Of course this is stupid behaviour, but it happens. The reason it happens is because the stupid driver has pretty good reflexes or they would have had an accident a long time ago, and learned their lesson. The problem for you, the motorcyclist, is that the stupid driver's reflexes are only fast enough when cars are involved, but that extra second delay in responding to the sight of a motorcycle is too much, and a crash may happen.

So far, you might be wondering how this is different from driving as though everyone is blind? Actually, not too different, but there is one place where you could benefit from this knowledge. Sometimes you are in a situation where you have the right of way, where the car driver is looking straight at you, and you decide to move ahead. At this point, you have forgotten, or are ignoring just this once, the rule that everyone is blind. But then the driver pulls out in front of you anyway, as if they were deliberately trying to kill you. But no, it turns out there was no homicidal intent, it was just that 2 second delay in the recognition. They simply didn't see you early enough.

One of the very worst situations for a motorcyclist is the oncoming car, making a left turn. It happens because of two visual problems. Just a quick reminder, "seeing" involves light going into the eye and making an image on the inside of the eyeball, on a screen called the retina. The brain has sensors that pick up this image and interpret what is going on, including such calculated things as size and motion of the image. The brain does not "see" everything on the retina as equally important. Big things and moving things get transmitted to the brain first. Close stuff takes priority over faraway stuff. Familiar stuff is recognized quickly, unfamiliar stuff takes more time to figure out. Now lets continue with the car turning left.

The small size of the bike on the retina of the eye makes it look further away than a car at first glance, and there is also the 2 second delay in recognition. The reason this type of accident is so bad is that you have almost no reaction time, and the car is a solid object that will bring you to a sudden stop. Sudden stops on immovable objects are very hard to survive, compared to sliding along a horizontal surface.

What can you do about this situation? If you see an oncoming car with it's turn signal on, and you are all alone on the road, you could try a slight weaving motion. This has the effect of increasing your visibility to the car driver. It's a bit hard to understand at first, but think of it this way. If a motorcycle is coming directly toward you, it presents a still image on the retina. Although it is slowly getting bigger in the car driver's eye, it is just not moving enough to get attention. The eye is better at detecting motion across the field of view. Think for example you are looking for toad on a muddy path. If that toad moves you are going to see it, until then it is almost invisible. As a motorcyclist, you want to be that moving toad, and hope the car driver is not really trying to kill you, and trust me most of them they aren't.

Photo: I photoshopped this together from an Australian Cane Toad, a motorcycle accident picture from a left turning car, and a Rebel "doo rag" from this web site. I would recommend Mr. Toad get a helmet to go over that doo rag.
Copyright the Lost Motorcyclist