Has Obama Made a Pact with the Devil? 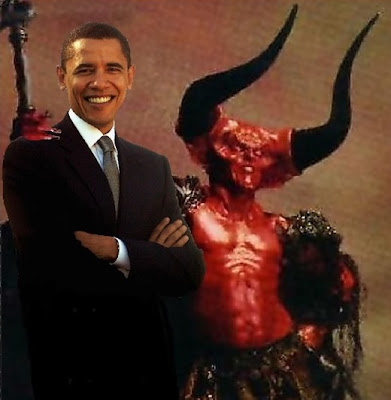 Barack Obama has been in office as President of the USA for one year now. Is he successful or not?

He has been what I expected. I am satisfied, in that the USA has not dropped a nuclear bomb on Iran or North Korea. In fact there have been no threats of war against anyone. I am really happy that the stock market rebounded. Health care does not affect me, nor do jobs in the US, or the US debt (not directly anyway, as I have no money knowingly invested in US dollars.)

What is missing that I wish could have happened? I wish that the Americans could have rallied behind Obama, that Fox news would stop the constant stream of derision, invective, and dumping on him that they do. It would be nice to see Americans become more worldly, and learn from Obama's example how to handle themselves in foreign the countries.

Was there any unjustified criticism? Yes, and the latest from Fox news was that there were more terrorist attacks on American soil than under Bush. That includes the army psychiatrist who shot his fellow soldiers in a US army base, which I didn't consider to be terrorism, as I believed it was a psycho shooting. But OK it's a debatable point.

The fact that, the 9/11 was not included as a terrorist attack for Bush, shows something really sad about the Republicans. It is of course very shocking that they want to keep score on terrorist attacks as if it was a game, and the more successful terrorist attacks, the more they win. That was demented for a start, and the truly withering attack by Jon Stewart on this point seems to have effectively shut them up. But even worse was the reason 9/11 was not counted, on the theory that this was the first attack, and the "War on Terror" had not started. My interpretation, and one that I have believed for a long time was that Bush and Cheney and the Republicans in general were in denial that there was a war on terror going on before 9/11, and that contributed to the carnage. Of course many attacks happened before 9/11, and many people tried to tell President Bush it was a threat from day one. The Republican administration ignored all the warnings and all the previous attacks. Republicans are admitting publicly for the first time that they were not even thinking about terrorism before 9/11.

Most moderates and progressives think Obama is doing fine. Most right wing Republicans think he is a massive failure. Which I guess is normal. But consider the confusion if he had been a successful Black president. Conservatives would not know what to think until some reputable preacher came up with an explanation simple enough to make sense to even a white supremacist, that Obama made a pact with the devil. So by failing in the eyes of the conservatives, he at least proves he is not in league with the devil, which may help in the next election.

Picture: photoshopped (of course) I stole it off the internet. There were so many to choose from, I won't even bother to credit the website, it was just random pick.
Copyright the Lost Motorcyclist