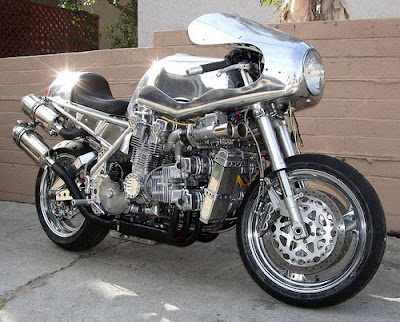 What is it the appeal of extremism? I'm not going into religious extremism here, just motorcycling extremism. I suppose you could call it the desire to be the best, but some extremism is obviously to be the worst, for example the bikers who want to have the dirtiest bikes ever. They will smear disgusting stuff on them, then encase the goo in plastic varnish then clear coat it so that it can never be washed away. That's how extreme it gets, and in this case it is not the desire to be the best.

Years ago, the extremists wanted the longest forks or the highest handlebars. Now the most popular item is the widest rear tire possible.

A few blogs ago, I introduced my concept of the BMW 6 cylinder sport-touring bike. Some might think six cylinders is too many, and that four, or even two, would be enough. But it is not really extreme, as there is the 8 cylinder Boss Hoss, the 10 Cylinder Dodge Tomahawk, (which is the motorcycle that God was riding in a previous blog). Andreas Georgeades in San Diego has built a Honda CBX V-12 bike. Because the previous sentence does not do justice, here is more information in the CBX Owners Club Magazine CBXpress .

And a video on Youtube when the V-12 CBX was finally completed.

Can you get any more cylinders than 12 on a bike? Twenty-four has been done, and how about this 48 cylinder home made bike.

A summary of some of the multi-cylinder bikes

I know what you're thinking, because there are basically only two reactions to extremism, and according to the statistics, you are most likely thinking "he (she, they) is (are) nuts." The other possibility, though rare, is "I have got to build one with 50 cylinders."

But among those who think some guys are nuts, there is still some interest. Even a grudging admiration, although you know that for yourself, the voice of reason would have kicked in years ago and said "Whoa! That's enough already." That may be an inner voice, or a female voice from the next room.

So what is the appeal of the extreme? I think one element is the simplicity. Instead of wondering, for example, what is the ideal compromise for the correct number of cylinders, you think simply "I am going to have more than anybody else." And what is the Achilles heel of extremism? It's not being called nuts, if anything that is part of the appeal of extremism. The down side of extremism is that somebody is always going to be more extreme, and you will end up in the middle of the pack of also-rans.

Extremism will always appeal to the few. Although the majority, obviously cannot be extreme, they will still have some interest.

You may be able to guess that in general, I am not really an extremist. But strangely enough, many of my motorcycle choices kind of ended up like that anyway. My first bike, the Honda CD175, which was humble by Canadian standards, was not only one of the biggest bikes in Sierra Leone, but until the first CB750 arrived, the CD175 also had the most cylinders, two. Some people wondered why two, when one cylinder would do? It certainly was not to reduce vibration, because both the cylinders went up and down together, and vibrated just as badly as a single cylinder 175. Maybe it was to increase the RPM limit, because that bike could rev to 10,000 rpm, which was pretty fast for those days. One could even say extremely fast.

My next couple of bikes were both steply ugsisters. I had a Yamaha 250, the sister bike to the popular Yamaha 350 that everybody wanted because it did wheelies. Sure the 250 cost a hundred dollars less, but that was soon forgotten, while the 350's wheelies remained forever in the memory. Then I had a Honda Silver Wing touring bike. Honda also had a "Gold Wing Aspencade" touring bike for sale, and you can guess which one was half the size, with half the number of cylinders. My Silver Wing was nicknamed the "Half-Asspencade".

The Honda CBX with the six cylinder engine, was not what you would call humble. And it was the only bike I've ever had with a louder-than-stock racing type exhaust. It was a little strange for me at first, but I quickly got used to people not being condescending for a change.

I followed it up with the BMW K1100LT, which in addition to being a BMW, I think it was about the most expensive motorcycle you could buy. When I filled in the purchase price on my application for vehicle insurance, the agent said he had to call headquarters because his price chart didn't go that high. Later, when I was talking to some other BMW owners who were looking at my bike, one commented, "Well it's a good thing some people can afford to buy them new so the rest of us can get them used later." "Sure. buddy, if you live that long". I had noticed that he had his arm in a sling and had recently crashed his bike. Actually, I figure you don't have to be a millionare to buy an expensive bike if you keep it long enough. I had the BMW for 15 years. I had my 250 Yamaha for ten years, which worked out to $50 a year. ($800 new - $300 sold) = $500 divided by ten.