Did Bush Make a Pact With the Devil? 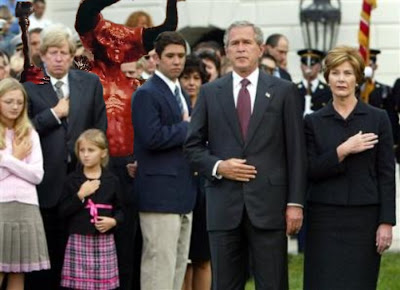 Dick Cheney had already chosen himself as the V.P. for the Bush campaign. George Bush was behind in the polls. On October 1, 2000, at 11:30 PM, Dick Cheney had a meeting with Bush.

"George, I know you wanna win this one. You are the only one who can end this reign of oppression by the godless socialist baby killers!"

"Well, Dick I'm fresh outta ideas. We tried every dirty trick in Karl Rove's play book, and we're still behind Robbin' Gore and his merry band of homosexuals in the polls."

"George, listen to me carefully. Principle is OK up to a certain point, but principle doesn't do any good if you lose. We also have to work, though, sort of the dark side, if you will. It’s going to be vital for us to use any means at our disposal, basically, to achieve our objective." *

"I still don't understand, Dick. What dark side?"

"I mean a pact with the devil George. We can do it here and now. I have a parchment and a quill. All you need to do is write your wish in your blood and sign it. Don't worry, spelling doesn't count."

George wrote his request in blood. "Now do I sign it?"

Cheney said "We're not finished yet, you also want to be a popular president. right? Add in that you want to have a popularity rating of over 80% before you sign it"

Dick answered patiently, "I tried that with Saddam Hussein. Trust me, 80% is enough"

George scrawled the request in blood and read it back. "I do hereby pledge my soul to the devil, in return for your promise to let me be president after the election and to have an 80% approval rating after the first year. Signed, George W. Bush."

He handed the parchment back to Cheney who, as the hour approached midnight, lay the parchment on the table in front of them. They turned out the lights and held hands.

At the stroke of midnight Dick called three times, 'Lucifer, come!' Above Dick's head, George saw a pair of gleaming red eyes. Then a pale hand reached across the table. Horrified, George turned on a light. The first piece of parchment was gone and instead there was a new piece of parchment, smelling strongly of sulfur. It had the words 'Tell no one of this pact. Be in Florida on September 11th 2001, and trust in your victory.'

So Bush became president (The Devil made sure regardless of who won the election), and his poll numbers shot up to 82% thanks to 9/11. But each happened with the unmistakable M.O. of the devil (i.e. the Devil's trademark is it never happens in a nice way like you wanted). Cheney and Bush have never confessed, and the original pact has never been seen again.


* The paragraph is made up entirely of well known quotes from Dick Cheney.
** "true story" quoted from Pat Robertson, about Haiti's deal with the devil


Picture: I had to photoshop this myself. The devil does not show up in normal photographs. This is Bush at a 9/11 memorial, the Devil is third from left, second row, and his hand is not over his heart.
Copyright the Lost Motorcyclist