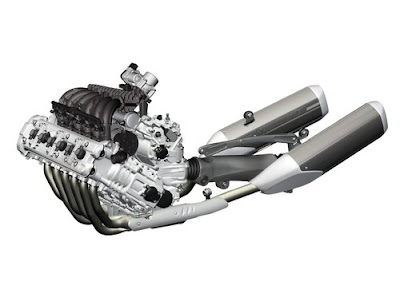 Since the BMW 6 cylinder sport-touring bike has not been built yet, it is impossible to take a real test ride. Also, the weather is not good, but by using the scientific method, we can take a virtual ride. I will be making assumptions based on numbers. All the same problems will apply to this exercise, as apply to measuring the temperature of the Earth for global warming. I am taking data from different places, measured in different ways, and trying to come to some conclusion.

BMW announced that its new 1600cc inline 6 motorcycle engine will produce 130 Nm or 96 ft-lb of torque at 2000 rpm. The engine redlines at 9,000 rpm (which is the maximum recommended speed in revolutions per minute.) and produces approximately 160 Hp, the same peak horsepower as the current 4 cylinder K1300GT.

Horsepower is useful in comparing acceleration and top speed. To imagine what 160 hp feels like, in terms of top speed and acceleration, would for me, be mostly based on once owning a bike rated at about 100 hp. One time I rode a 145 Hp sport bike, and took it very briefly up to 250 kph (I won't say where) and then I decided that was about as fast as I dared. Maybe if I had been at the Bonneville salt flats, I might have gone faster, because the 145 Hp bike was still pulling hard and felt stable when I shut off the throttle. Other than that brief fling, the fastest I have ever gone on two wheels was 180 kph, and I did that with both the CBX and the BMW K1100LT. I'm sure the BMW could have gone faster, but the CBX had nothing left.

Torque is an often misunderstood number, so I don't often bother with it. But if we take note of engine speed (in this case 2000 rpm), it can give us a further clue about engine flexibility, and willingness to pull at various engine speeds.

Most motorcycle engines have a power curve, where the torque (or turning force) is weak at a low rpm, and builds as the engine turns faster. It peaks before the horsepower curve and begins dropping while the horsepower continues to rise for a while. Then you reach the engine's maximum rpm, and if you don't quit, things start to break. This maximum rpm is called the red line, which is a line marked on the tachometer for your reference. Actually there is a red "zone" on most tachometers. You may not cruise constantly in the red zone, but you may go into it briefly without danger of breakdown. Most people just go by the factory's recommendation, but today fuel injection engines usually have rev limiters that cut the engine for you at the red line. That feature is pretty useful for me, because I do tend to push the engines at times.  The CBX had a neat trick where you could bounce the tach needle off the stop pin (it was around 11,000 rpm, I think red line was about 10,000.

Depending on the torque curve, you might have an engine that is very powerful at say 8000 rpm, but has almost no power at 2000 rpm. In fact some engines are not designed to pull at all at 2000 rpm. They can idle down to 1500, but before engaging the clutch you have to rev the engine to 3000 and keep it there to prevent stalling and bucking. In motorcycles, 2000 rpm tends to be the lowest speed an engine will normally tolerate. But my Toyota Matrix is quite happy driving along at 1800 rpm, although if I want to accelerate, I need to shift down. But then, the Matrix also has "variable valve timing", which helps it run smoothly at lower rpm and still produce power at quite high rpm. As far as I know, most motorcycles have fixed valve timing, meaning their engines have to stick closer to their designed optimum speed, and except for Harley Davidsons, that optimum speed is usually higher than a typical car engine.

From what I can tell without seeing the graph, the BMW 6 has about the same torque from about 2000 to 9000 rpm. This is quite unusual, and it means that the engine can be loafing along in top gear at only 2000 rpm, yet accelerate hard without even downshifting. And having 6 cylinders, you would feel very little bucking or roughness even at 2000 rpm. All you would hear is a growl build up to a scream as the engine winds up to it's maximum speed of 9000 rpm, and the engine would appear to pull really hard all the way from say 80 kph to 360 kph without shifting gears. (assuming that it has enough power to go 360, which is unlikely as BMW probably would put a speed limiter on it, and you also have to consider wind resistance on an unstreamlined bike.)

I have some other numbers to give a better feel for this broad power band.

Harley Davidsons are an unusual case. Of course there are a lot of different models, so I'm going to just take one I found on the internet, claimed to be stock, but I don't know which model it is. The Harley Davidson is designed to produce a high torque number for advertising purposes. The engine is tuned to run best at 2000 rpm. At that speed it produces an amazing 65 ft-lb. of torque. Unfortunately it is downhill from there as you pick up speed, and the maximum horsepower is only 42 Hp at 5000 rpm. The Harley Davidson's two cylinder design is a little rough at 2000 rpm, but it feels right, but any lower and it starts to feel wrong. To me it feels wrong even at 2000, but then I'm just used to revving motorcycle engines higher. The first time I drove a Harley on a highway, I was quite happily riding along in third gear thinking the engine sounded good, but I had two more gears to go. And, just remember, the BMW 6 produces a lot more torque, 96 ft-lb compared to the Harley's 65 at the same 2000 rpm, but instead of dropping off, the BMW 6 continues to produce the same torque more or less until 9000 rpm.

So that's what the bike will feel like. At only 2000 rpm it still has 50% more torque than a Harley, but will be at least three times smoother because of the 6 cylinders compared to two. Most other bikes can't even run at that low a speed. But then as you to accelerate, it just keeps pulling, the power building smoothly and linearly as the speed rises until you are up to 160 horsepower, at which point you will be in the high 200 kph's. Shifting down, of course will result in even faster acceleration. It is almost certain that BMW will have traction control and wheelie control to prevent skidding the tire or doing burnouts. And, according to BMW, the six will get better gas mileage than the current 4 cylinder K1300GT.
Copyright the Lost Motorcyclist