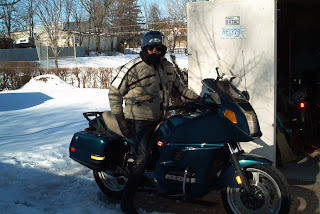 I just got my subscription renewed to Cycle Canada by my grandson, who sold one to me through his grade 5 magazine subscription program. I had let my last subscription lapse after they printed the picture of a guy with a naked butt. Guess what is on page 14 of my first renewal issue? Hey, nothing wrong with that, but if I really wanted a magazine with naked butts, I'd want them to be female, and I don't see any of those in Cycle Canada.

Enough ranting, time to discuss an idea I got from one article, called "The One Bike Challenge". Four people each picked a bike as if they could only have one bike to ride. Me, I have three different ones in the garage, including Mary Ann's Burgman that I can ride whenever I want to. Actually the only time I can't ride it is when she is riding it. When we go out on a ride together, I can't ride it because Mary Ann has not yet learned how to ride a manual shift bike. My primary bike is the Kawasaki Vulcan 900 Classic LT (LT meaning with windshield and saddlebags). I also have a 1970 Honda CD175 which is fun to ride because it is like my first bike, and brings back memories.

I would go one step further than this challenge to choose only one bike. How about only one bike for 15 years? Now that gives you something to think about, instead of riding one for a few months then trading it in. Sorry, but you pick one and you're stuck with it.

There are certain qualities a bike has to have if you want to stick with only one bike and keep it for a long time. They are not the same qualities you look for if you can have a rotating stable of bikes, with four available on any given day. For one bike, I don't think that horsepower and outright performance are all that important. And neither is style. That's because you get bored with anything but classic styles pretty quickly, and fashions change. All you need is reasonable horsepower. Since power keeps going up in new bikes, no matter what you have today will be considered feeble in ten years. Forty years ago a Triumph Bonneville 650 was considered very powerful. Today that amount of power would barely qualify it to be a beginners bike. Next is cornering and braking ability. You need these, of course, but almost any bike today can do that adequately if you're not racing.

Versatility is important if you stick with one bike for the long haul. Not only should it be able to perform adequately in almost any riding situation, from gravel to freeways, but it should be easily modified to slightly different requirements, should they arise. For instance, you may need to add a backrest, a trunk or a luggage rack. Or maybe remove the windshield or change the handlebars or mirrors. Those are some things a versatile bike should be able to do.

If I'm stuck with one bike, I am likely to give up riding if I find it painful once the novelty wears off. A related issue is ease of use for the controls. The controls get used a lot, thousands of times each riding season, if not on each ride. The handlebars should not be stiff or require heavy effort. The gearshift should be positive, and not stick between, or miss gears. The brakes should be powerful, but not prone to sudden locking up, and easy to apply maximum braking power with no warning if an emergency arises. The throttle is used constantly, and should not require little adjustments every few seconds, and should not vibrate until your hand goes to sleep either. I also like a bike with a starter button that works every time, even if the bike has been sitting for months.

Reliability is never having to say hello to the dealer's mechanic, unless you are at a free hot dog roast put on by the dealer as a public relations event. I am willing to do a lot of fiddly work myself, but I do not enjoy disassembling modern engines or transmissions on expensive bikes. And to me reliability means that I don't have to worry that when the bike fails it is going to strand me beside the road without warning thousands of miles from home, and need to be trucked or pushed to the nearest dealer.

Here are some of the features that I would look for that make a bike more rider friendly. A big gas tank that doesn't keep running out and needing to be filled, 300 km per tank is OK. Fuel injection has been refined enough to be a feature I want. Otherwise the bike may not start easily after sitting for weeks. Tubeless tires mean you can use a patch kit and pump on the road, otherwise you may need to call for a truck. Modern tube tires are really hard to change beside the road.

I would avoid a bike that has a chain and no centre stand (e.g. Kawasaki Versys), because oiling the chain would be an annoying affair on a long trip. I had one of the low maintenance O-ring chains that might be OK, but I also had a centre stand on that bike. The Vulcan also has no centre stand, which I wish it had, but then it has a lube-free belt drive. I did meet a guy once on a motorcycle who took it to the dealer every time he needed to adjust the chain. That's not like me.

I still want a bike that can carry a passenger in comfort and safety, though I rarely do it any more.

I think I could actually make do with any one of the bikes in the garage, but the Honda CD175 is forty years old, and has tube tires. It starts reasonably well without fuel injection, with the kick or electric start, but that's because it came along before clean air requirements. The biggest downfall of the CD175 is the engine that I feel bad for flogging at top speed for any length of time. So I try to keep it to 80 kph, which is really slow for the big roads and no good for the freeway. I have been on the freeway for short stretches, where I lean down and hammer it, but I feel guilty.

The Burgman 400 is fantastic around town, and I think it would do just as well going to the west coast. Its' top speed is 140 kph! It has great weather protection, carries luggage easily, except that if you strap a duffel bag to the passenger seat it is awkward getting at the under seat compartment. My only real problem is understanding how to get all the body panels off to do the maintenance. It's not impossible, but very different from working on a typical open engined motorcycle.

The Vulcan is a bike that is very middle of the road, and I could do almost anything with it. In 30,000 km I have had no trips to the mechanic, except to replace a rear tire that was worn out. And then I went to an independent shop. The only worry is getting a flat with the tube tires, but I really have not had many flats in the last 30 years.

My old BMW K1100LT would also be considered, as I did actually have it for 15 years, and many of those years it was my only bike. I would not say it was as reliable as my Vulcan, though. The BMW needed some work in the first few years under warranty. After that it never had to go back to the dealer, but the ABS brakes stopped doing their thing, and I did need to troubleshoot some problems myself, plus do the regular maintenance as the bike got older and piled on the miles. It was fuel injected, with really good weather protection and luggage capacity. It was actually quite easy to work on, for example the rear wheel came off with just a few bolts. But the K1100LT was pricey, (in today's terms, a little over twice the cost of the Vulcan), and it vibrated annoyingly at times, and it ultimately failed suddenly, completely, and with little warning, on a part that lies buried too deep in the machine to be easily checked. I did ask the dealer and he wanted $1000 and several days just to look, so it must be complicated. It's also nice to buy from a local dealer that does not get shut down by the manufacturer a few years after you bought the bike.

So my "one bike challenge" winner is any bike I ride right now, which is just about the same conclusion that Cycle Canada came to.

Picture: Me getting ready to go for the first ride of the season on my BMW a few years ago. There is one thing I miss about that bike, it blew dozens of little donut sized smoke rings that floated over the driveway when I started it up first time in the spring. But not enough to keep for that reason alone.
Copyright the Lost Motorcyclist