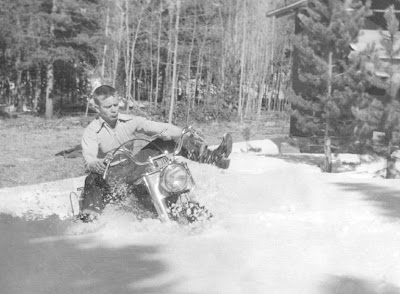 It appears that the Province of Quebec has banned riding motorcycles on the street from December 15 to March 15 each year, unless they have winter tires, which basically do not exist. Although I now live in Ontario, for some reason this law still gets under my skin.

You might wonder why anyone would care, especially living far from the border. But I used to live in Quebec and I liked to go motorcycling when the weather permitted in the winter (not that often, where I lived up north). Granted, it's generally warmer in southern Ontario, and we have more ice free days. But what about a nice warm spell on March 10th to 14th, when the Quebec Police have announced they will be especially vigilant in handing out $200 fines, while everyone across the border is enjoying the weather?

For me the ability to go out riding on a winter day, when the streets are clear and the weather allows it, helps me deal with the length of our cold, dark winters. I enjoyed going for a ride Thursday, and again on Saturday. I have all the cold weather equipment I need, except winter tires, but then I don't go out when there is ice and snow on the road. OK I'll admit occasionally I may hit a small patch of snow, but it's no worse than a patch of sand, oil, or wet leaves in the summer.

Now I'm worried that the folks in Ontario are going to start thinking it's a good idea.

If I was still living in Quebec, I would try and thwart this law in any way possible. The first one would be to actually go riding as often as I could in the winter, and in front of the police wherever possible. There are several ways to do this. One way is to actually buy snow tires. Not many are available, but you can get a limited range of sizes from France. They are only available in about 4 sizes, but if there is a bike that fits these sizes, (possible a Kawasaki KLR 650) I would buy it and install them. This would be a very big factor in any motorcycle purchase for me. Once I had the snow tires, I would then make every effort to get out when there is actual snow on the road. Which come to think of it is way more dangerous than going out with summer tires on a clear winter day. But riding a motorcycle on snow with winter tires is legal so I would at least be conforming to the law, and instead of just riding for fun, I would be making a political statement too!

Another option is to apply for a special exemption, which is available for people travelling south for a vacation in Florida. It is free, and I think you can apply online. I would carry this around when being stopped by the police.

In a perverse way, this law might actually make the winters the most fun time of year. It would be a lot more exciting going out on a cop-baiting ride in the snow, than my usual donut run to Tim Horton's at Port Dover in the summer.

Picture: Riding in snow, 1952 perfectly legal.  I got the pic from the link below: