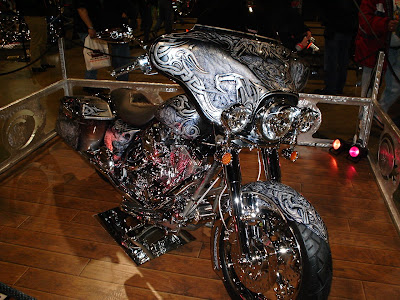 I once entered a bike in the Toronto motorcycle show, but I did not win. However, I did come to some conclusions about show bikes, and what, exactly makes a show bike competitive.

If I may be black and white about it, there are two kinds of show bikes. One where you add all kinds of crap to the bike, the other where you strip off all kinds of crap from the bike. OK I know I'm oversimplifying a little. And maybe some of the fashions are changing. But it was back in 1986, when I entered my Honda CBX in the "International Motorcycle Show" in Toronto (Incidentally the successor to that show is on again for 2010, this coming weekend.) I must have spent a month cleaning every nook and cranny of that bike to get it perfect for the show. Then at the last minute, I realized that the bike was basically stock (except for the Wolf mufflers), and I would need some kind of unique accessory to sweep the judges off their feet and get the blue ribbon. So I knitted a little wool brake fluid reservoir warmer, in the colours of the bike which were red, grey, and black. Well, to be honest, I asked someone to knit it for me, as I have no clue how to knit.

Then I got a truck to take the bike to the show, as it had to be clean when it got there. I actually thought that since it may be the only sport touring bike in the show, I would at least score a win in that category. Little did I know. As soon as I arrived, the judges assigned it to the category "Asian Touring", which in 1986 meant I was going to be in competition with about 20 Goldwings bedecked in hundreds of pounds of chrome and extra lights. There was no sport touring category, but there was a sport category where I might have had a chance, but I could not be accepted by the "sport" crowd with those two little saddlebags on the back of the bike. So in the end I didn't get a blue, red, or whatever ribbon comes third, I don't even know what colour it is. I don't think the judges even noticed all the custom knitting that had been done on the brakes. At least I got a chance to drive the bike home from the show, because I wasn't worried about a little road dirt at that time.

I was thinking afterwards, there is a reason why people don't enter sport touring bikes in shows. It's because you rarely see a sport touring bike with much stuff added for show, or taken off for show. The one place I see sport touring bikes heavily modified is in the Iron Butt rally, where they have GPS systems, extra fuel tanks, extra lights, or whatever it takes to go 11,000 miles in 11 days. Sometimes I think that it mostly takes being a bit nuts. Sport touring bikes hardly ever have chrome added just for looks, the way a lot of cruisers do, or luxury touring bikes. I guess it's the very nature of the owners. They want just what's necessary to get them where they are going.

Sport bikes are another case. People who buy sport bikes do like to "improve" on them. Change some parts to reduce the weight, or increase the tire grip, or power, or the ever popular increase in noise level from the exhaust. But they never seem to add stuff that makes it heavier or slower.

The real hard core show bikes are the customs. Those are the bikes that are actually made for shows. You might be able to ride them to the donut shop also, but that is only a secondary purpose. Although many of the custom bikes seem to be so outrageous that you couldn't use them in real life, all are equipped with the basics, such as brakes, gas tank, motor, seat, wheels, handlebars, lights, speedometer, even a licence plate (usually turned at some crazy angle and hidden where no cop would think of looking).

Things have progressed since 1986, so I included a picture of the type of show bike you might be competing against today, which I found on the Internet.
Copyright the Lost Motorcyclist