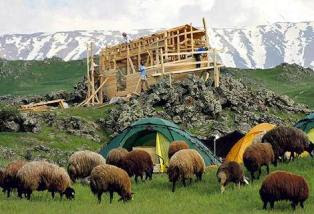 I like a fairy tale as much as the next guy. But I don't actually believe that Cinderella is the literal truth. I draw the line at making an imaginary friend out of my Fairy Godmother. And no amount of therapy can help me if I start killing and torturing people based on what my Fairy Godmother tells me.

Of course I'm partly kidding, in that the good Fairy Godmother would not actually tell me to kill or torture someone. Realistically, my fairy Godmother would limit herself to telling me that something is mine, even though the law does not agree. Then when I try to regain the imaginary "rightful possession of my property", and the owner fights back, well then the Fairy Godmother cannot be held responsible for what I do.

These fairy tales I am referring to are Evangelical religion that believes in the literal truth of every word in the Bible, and believes global warming is a fairy tale. Let me explain with the story of Noah, why bible stories are like fairy tales to me.

It is apparent to me that the story of Noah was substantially made up by people who had no knowledge of the world as we know it today. They did not know how big the world was, no clue how many species of animals there were in the world, and probably also had little concept of the balance of nature. If there was an original true story of Noah, it could have been a local flood where Noah took a couple of goats, a pair of camels, maybe cows, his wife and kids, the dogs and cats and some food and floated around for a while till the water went down. But then, I think some religious fanatics got hold of this simple story and tried to make it into something bigger than it was. They exaggerated the story to the point where it included the whole world, all the animals and every living human. I'm sure those story tellers were thinking that no one will ever question them, as nobody will ever know how big the world is, nobody will ever know how many animals there are. But just to be on the safe side they didn't actually say which animals are on the boat, or how many, so that on the off chance that somebody finds a new animal, they could reply "Oh yeah, that one was on the ark too!"

In the artist's conceptions of Noah's ark , you regularly see elephants, tigers, giraffes, and hippos (and for the most extreme groups, dinosaurs too), we should remember that almost none of these animals were known to the writers of the story of the flood. They probably imagined no more than 20 pairs of animals on the boat. They also didn't know how high the highest mountain on earth was, when they innocently wrote that the flood would cover it. Nor were they aware that oxygen masks would be required at that height.

The problems with this fairy tale are almost too many to count. But while nobody really believes in Sleeping Beauty or Peter Pan, which are both more believable, many people are fanatically trying to prove the fairy tale of Noah's Arc is true, and that global warming is false.

If it were not bad enough that the Story of the Flood is so comical, the point being made by the writers is that everyone on Earth has to believe in their God, or they are condemned to hell and drowning. It stops being comical for me at that point.

It is discouraging that some highly educated people also believe the story of Noah as the literal truth. By educated I mean they apparently paid tuition, took notes and regurgitated facts. But if "educated" people cannot be convinced that the story of Noah is false, with it's unending array of comical impossibilities, how would you ever explain the importance of alternate energy sources to the world economy and environment?

Here is a fairly elaborate attempt at explaining all the myriad holes in the Ark story, just to give an idea of how much thought has gone into it.

Picture: Noah's ark scaled-down replica being built on Mt Ararat by Greenpeace activists, I'm pretty sure they don't believe in the literal truth of the story, but they are using it in a figurative way to warn of potential flooding from climate change.
Copyright the Lost Motorcyclist