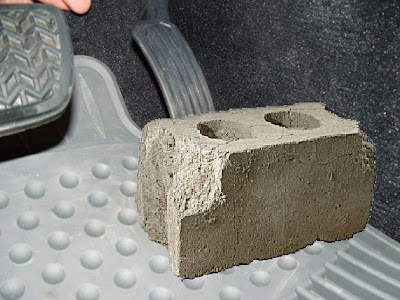 I have a Toyota Matrix, and I have been following with some confusion the Toyota scandal involving 2 million recalled vehicles. Actually, I guess it was over two million recall notices, but almost a million of those recalls went to vehicles that had already received one recall notice. So maybe more like one million vehicles.

I was trying to figure out what had gone wrong that Toyota would have built so many faulty vehicles, but most of the news stories were mostly about how this is going to impact Toyota's profits, and the rest about comparisons to the Ford Pinto, and not about what was wrong from a mechanical point of view. Apparently even the dealers didn't know the mechanical details.

I'm sure the details will come out eventually, and I'm not really worried for myself, as my 2005 Matrix (I have the OSB model: Oh so basic) is not on the recall list. And because it is OSB, it also has many features that override the problem of a stuck accelerator. One is called the clutch. The other is called the ignition key. And a third is the brake pedal. But some of these high-end keyless entry, remote-start automatic models with ABS brakes and anti skid controls, are so complex that if your accelerator pedal ever gets jammed under the carpet, you might as well kiss your keester goodbye.

How did we ever get to this sorry state? People don't drive cars anymore, the cars drive themselves while people talk on the cell phone or read newspapers on their iPads. Or both.

The funny thing is, even with our OSB Matrix, we had a baffling problem. A few days after we bought it, Mary Ann was at a friend's house and phoned me to say the Matrix would not start. I went over, got in and it started. She had to go somewhere right away, so I said "I'll figure it out later". But then she had the same mysterious problem at her next engagement, and once again I bicycled over to see if I could help. Again she got out of the car, I got in and it started instantly. I said "Now we have time, let's figure out what you're doing different from me." After a few minutes, I figured it out. A Canadian Tire car mat that I had thrown in the front to protect the nice new Toyota carpets, had bunched up under the clutch pedal. The clutch pedal must be depressed in order to start the car. Mary Ann was pushing the clutch pedal until it touched the mat, and that was not far enough. I was pushing it hard enough to compress the mat, and the car started. When I was a kid we had no such stupid lockout switches. If you forgot to push down the clutch and were in gear, the car simply lurched forward. No harm done unless your newborn baby was lying down in front of one of the tires, and I had a rule against that anyway.

Next time I spoke to my Toyota dealer, I started to tell him the story, and well before the surprise ending, he jumped in with "You must have put in a new mat." I said "How did you know?" He answered "It's just about the only thing that goes wrong with them" I said "So why didn't you tell me before I bought the car?" He said "Well, actually it's pretty rare."

So now, if the throttle pedal gets stuck behind a car mat, or anything else you might care to throw on the floor, you can no longer shut down the car, so you crash and die. Fortunately this has not yet happened in Canada, and I consider it to be a far cry from the Pinto, where somebody rams you from behind and you go up in a ball of fire.