What Happened to Jerry Pournelle? 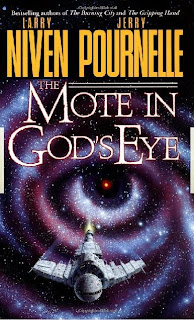 Back in the eighties, I used to read a computer magazine called Byte. In it was a column I also often read by Jerry Pournelle. I still remember his frequent use of the expression "Sigh.", as a complete sentence to indicate exasperation yet acceptance of computer glitches. I first heard of Jerry Pournelle as a science fiction writer, and one of his more famous science fiction novels was "A Mote in God's Eye" co-written with Larry Niven.

Apparently, like a lot of people in the last decade he has become even more conservative. Back in the eighties, the term conservative had almost no meaning for me, when the political divide was much less distinct than it was today. The distinctions could be partly because I can recognize it easier now, and partly because people were not as polarized by inflammatory newspapers, TV and radio in the eighties. And the "War on Terror" had not yet begun with all its attendant propaganda.

The signs of Jerry being conservative were there to see in the eighties, if I had cared. The book "Mote in God's Eye" had a racist and colonial theme, with Earth colonizing a planet whose indigenous (and intelligent) species was called the Moties. In fact a similar theme to the recent movie "Avatar" about Earth colonizing the moon of Pandora.

However, Pournelle and Niven's book has a theme of racism, discussions of the need to exterminate the Moties, fear of the Moties' high birth rate, unlike the movie Avatar whose theme is more the preservation of nature, and the evils of greed-driven colonization.

Since the book came out in 1974, there have been a lot of changes in the world. So how has Jerry adapted his ideas to the realities of today? He has written recently in his blog about education, about the terrorist attack (the underwear bomber), about Afghanistan, and about global warming. In the first three, he seemed to be against racial integration in schools, and in favour of racial profiling in airports, and in favour of more troops for Afghanistan. That, in my mind confirmed that he was leaning heavily to the conservative side of the spectrum. And so when I came to read his take on global warming, I was not surprised that he came out as a denier . I wonder why so often people who are racist, also happen to be in favour of war, and to top it off also deny global warming? Just a coincidence. Or could it be a result of political propaganda rather than logical thought influencing their conclusions?

So in "Musings on Climate Change", January 2, 2010, we get the summary statement:

"And I am far more afraid of ice than a couple of degrees warming. I fear shorter growing seasons more than I fear longer growing seasons. If the climate must change -- and stasis is unlikely -- I'd rather be warmer than colder. I'd also rather be richer than poorer. Enough. It's bed time."

Every statement he makes in this summary, taken by itself is true, in fact nobody ever disputed them. He seems to have completely missed or ignored the points that are being made in the Global Warming issue. Considering the negative impacts that scientists have suggested such as flooding, massive human refugee populations, runaway temperature feedback, extreme weather effects, migrating diseases and pests, and species extinctions.

But to me this is intellectual dishonesty, as he should know that every scientist on Earth agrees with his final concluding points, I myself would prefer a couple of more degrees this fine January morning in Canada.

Not really changing the subject here, but it's a similar technique in his article " The Truth about Afghanistan, and its meaning for US policy" December 2, 2009.

Here is Jerry's version of truth:

"The obvious truth about Afghanistan is that there are two conditions for an American victory, assuming victory means building a democratic republic in the territory we call Afghanistan. One has to do with the number of troops. The other is the length of the commitment: how long will we stay?"

I think it's the same kind of conservative logic that we get from "Mote in God's Eye". He follows up his supposed military logic with a comment that Obama's policy will meet neither condition. But what Jerry is really talking about is his (incorrect) assumption that a victory is needed to establishing a democratic republic in Afghanistan. Which nobody in Washington is thinking about any more. What they are thinking about, in case Jerry has not noticed, is the stability of the neighbours, specifically Russia and Pakistan that are dealing currently with Muslim extremists uprisings. And planning for the withdrawal of US troops without creating total chaos. Obviously the war is hopeless with Jerry's assumption of victory. I think most people are long past caring about a democratic and corruption free Afghanistan where everybody can fly their kites and listen to Western music. They probably just want the killing to end, and recognize that genocide is not an option. Unlike "A Mote in God's Eye", where it was inevitable.

Then without reading more, I can see catchphrases in his titles that make me think Jerry is getting quite extreme in his Republican right wingism. Titles like "Big science strikes back" and "Breathtaking arrogance of the EPA". Words like "tyranny" (Google counted 168 uses) and phrases like "There is no better term for the ObamaCare Bill than Despotism. ."

So that's what happened to Jerry Pournelle. From being a respected science fiction writer to being a Teabagger. He has gone from writing a book titled "The Mote in God's Eye" to being the mote in God's eye. As Jerry used to say ... "Sigh."