About Supporting the Troops, Canadian Style 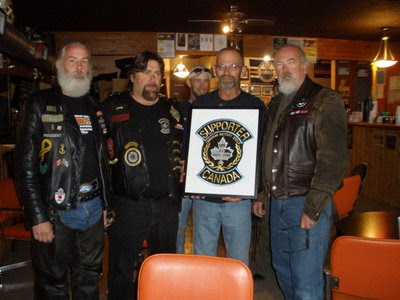 I just read a headline in today's newspaper "Taliban Smell Victory". I think they could smell victory quite a while ago, or they would not have been able to recruit so many people to run around blowing themselves up and planting land mines.

The point where I realized that the war in Afghanistan was going nowhere was at a CIGI talk given by the Canadian Brigadier General Denis Thompson, April 15, 2008 in Waterloo. He gave a presentation of all the methods Canadian forces were going to employ to pacify Afghanistan. Afterwards was a question and answer, where one person asked "Since the Soviet Union lost in Afghanistan, what makes you think Canada can win?"

The Brigadier General answered "Because we were invited there." I knew right away he had made a slip up, because the Russians had been invited too. However, the Q&A was not a debating forum, you simply asked your question and the speaker replied and then on to the next questioner.

I'm sure if any Taliban were sitting in the room at CIGI with us, they could have smelled victory right there, too.

I do not particularly like being accused of "Not supporting the troops" when I say we are not going to win this one. In order to win, you need to know what you're up against. We lost it a long ago when we allowed the Christian Fundamentalists to make this into a Holy War against Islam. We lost it when we admitted that we could not stop the torturing of detainees. We lost it when we started thinking that we were going to advance the cause of women's liberation in Afghanistan. We lost it when the U.S. decided to pull out and go fight Saddam for the oil, instead of hunting Bin Laden. The fighting itself is now just window dressing. You can't win a war if you can't think, and we cannot think while we have our heads full of ridiculous propaganda.

But when it comes to supporting the troops, I am right there. Recently, a friend of mine died, and I went to a reception after the funeral. The reception was held at the local Royal Canadian Legion. I had no sooner walked in than somebody hissed at me that I was dishonouring the dead and I needed to remove my hat. Apparently the dead he was referring to were the war dead. Later I found out that every branch of the Legion has the same inflexible rule. Hats off to honour the dead. No headgear of any kind. I took my hat off. I want to support the troops after all.

But last week, there was a Halloween party at the Royal Canadian Legion in Campbellford, and somebody dishonoured the dead by wearing a hat. Did somebody tell him to remove it? NO. He was given a prize for his costume. Was there any talk of dishonouring the dead? Apparently not. It sounds like a double standard to me. I cannot wear a baseball cap that says "Canada" on it, but this guy can wear a Ku Klux Klan hood, and carry a noose draped around the neck of a pretend black guy, and wins a prize.

Not one article or comment I have seen about this has anything to say about the "no hats rule". I don't want to get into a ridiculous argument of whether or not this was bad taste. But apparently I'm the only one who remembered that wearing any hat at the Legion hall dishonours the dead, let alone a KKK hood. Next time, you sanctimonious hat haters, how about reminding the racists to remove their hoods, too.

I just want to follow up with the comment that if people at the Legion, presumably with some military sensibilities, cannot figure out whether this KKK guy should be kicked out immediately, then we really have no chance winning a war in Afghanistan, because winning requires some cultural smarts as well as air strikes. If we are going to be idiots, we should stay home and be idiots.

Here are the links to the rule, that requires anyone entering a Canadian Legion (an Armed Forces veterans’ association) premises to remove their hat.

Considering all the controversy about wearing headgear of any kind, how come the KKK guy gets a free pass and a prize to dishonour our war dead?