How to End the Creation vs Evolution Debate 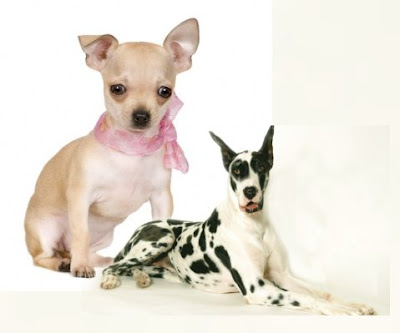 Last night I went to a presentation by Dr. Ryan Gregory about Darwin's finches. After talking to him about creationism vs. evolution, an idea came up that may settle the evolution vs. creation question once and for all. He suggested that if we could eliminate every dog breed between Great Danes and Chihuahua's, we would soon get two different species from the dog species. It would be cruel to exterminate all other dogs, but here is an article in Scientific American about using dogs to prove (or disprove) evolution.

I would be nice to once and for all put an end to the evolution vs. creation debate. Not because it hasn't been fun, but it has been going on too long, and too much money and talent have been wasted in an unproductive argument. I call it unproductive because, unlike a real scientific debate, this argument has produced no new knowledge to benefit mankind. If we could settle the debate once and for all, we could get one of two results. On one hand we would at last know that the creationists are right, and everybody could accept Jesus as their saviour. On the other hand, if the Darwinians won, the Creationists would promise to stop harassing teachers for teaching science in public schools, and use their considerable religious financial resources, brain power, and imagination to help rebuild the system of public education.

We can learn from the past. There used to be an argument between Bible believers and scientists about the Earth being flat or round, and that eventually got settled. All it took was one great experiment, called the Bedford Level Experiment. A flat, straight canal, ten kilometer long was used. Markers were set up, at intervals, and a surveyor's scope was used to determine that the the surface of the canal did indeed curve as predicted to follow the roundness of the Earth.

Of course, there are still a few hangers on for the Flat Earth society, but no large organized religious movement supports them, and no legal challenges to teachers for spinning a globe in the classroom. This, despitethe fact that there are a number of statements in the Bible alluding to the Earth being flat. The Bible believers simply found new ways to interpret God's words, so they now can mean that the Earth was round.

There is a problem with Evolution that may explain why almost half of Americans apparently do not believe in it. The problem is that no-one has ever seen a species evolve that God didn't create in the first place. As a matter of fact, no one has ever seen a land-based animal species that was not on Noah's ark. So apparently every species today is still descended from a pair of animals on Noah's ark.

To end the evolution/creation argument once and for all, we need something similar to the Bedford Level Experiment. Something you can see with your own eyes, that is so obvious that most reasonable people would be convinced one way or the other regardless of their previous beliefs.

If there was some way that we could see a new species evolve, this would be the end of the argument, I think. Even if we used selective breeding instead of natural selection, it would still prove the point conclusively. The point being that new species can evolve from existing species.

The basic experiment would be to use selective breeding to create a new species of animal or plant. I think this would be pretty conclusive, in that creationists claim it cannot be done, and if it can be done, it proves that not all species were created by God.

Dogs would be a good choice because we have been breeding dogs for years, and we have apparently never produced a new species that cannot interbreed with dogs, but can still reproduce itself. We have bred hundreds of different kinds of dogs already, but we have never attempted to breed a "Not-a-Dog". We don't even know what a not-a-dog looks like, except it must be a species different from dogs, and different from any other species created by God.

In order to perform this experiment, with the desired results, it is not enough to simply breed a new animal from a dog. That is a scientific, approach, and it is wrong, because the ultimate goal is not to breed a new species from a dog. The ultimate goal is to convince millions of people on one side or the other, that their cherished belief is wrong. So unlike a true scientific process, the experiment needs to be closed ended,  it needs to be widely publicized in advance, and the rules need to be mutually agreed to. Finally, there needs to be a way of declaring a clear cut winner at the end, with impartial judges approved by both sides.

Here is my own suggestion. Take a Chihuahua breeding pair, and breed them back up to as big as they will go, eliminating all the intermediate stages. Once you have created a giant Chihuahua weighing over three hundred pounds, try mating it with a Great Dane or a Russian Wolfhound. If you cannot mate them together, you have created a new species, and Biblical creation will need a new interpretation. If they can mate, then Darwin was wrong, Jesus is Lord, and we will promise to start teaching the bible story in school instead of dinosaurs etc. Is that fair or what?
Copyright the Lost Motorcyclist