Can We Learn Something from Caribou about Environmentalism? 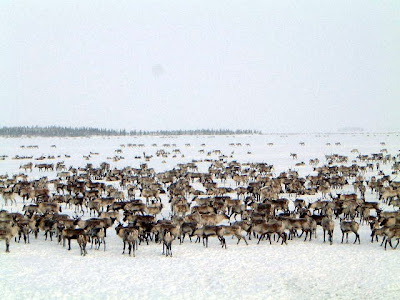 There may be a debate about whether we should use wind power, about whether global warming exists, or if oil is indeed running out. But in that debate, I feel there is no doubt that one side is treating nature with respect, while the other has a superior attitude. As if Man can defeat nature with his immense brain and technology.

There are some lessons to be learned from native people about our relationship to the environment. Here is a story I found in Goliath

"According to narratives by Chisasibi Cree elders in the 1980s, a disaster occurred in 1910 at Limestone Falls, near the center of the Quebec-Ungava peninsula (Berkes, 1999, chapter 6). Equipped with repeating rifles that had just become available, hunters abandoned their hunting restraints and conventional ethics of respect for the animals, and slaughtered large numbers of caribou at the river crossing point. The caribou had already been in decline along the Hudson Bay coast. Following the event at Limestone Falls, the herd disappeared altogether from the lands hunted by the Cree and did not reappear until the 1980s. The Cree believe that all changes occur in cycles, and the elders at that time had predicted that the caribou would return one day."

You could argue that it was not one bloody and wasteful slaughter of the animals in 1910 that caused the caribou to disappear for over 70 years. After all, the caribou were already starting to dwindle. But there is no doubt that there was a lack of respect for nature in that 1910 hunt with the newfangled repeating rifles. Secondly, the lack of respect that year was a break from the traditional ways of hunting. The subsequent disappearance of the caribou certainly gave people a pause for thought. Over the next seventy years, the story was retold about the arrogance of the hunters in 1910, so when the caribou reappeared in the nineteen eighties, it didn't take too much to convince people to be respectful, and not wastefully kill the animals.

Are we to take this story as an example that being respectful toward nature is good? Or is it an obvious ploy to con the superstitious natives?

There are many such stories told all over the world, of native groups who have either managed their resources carefully, or wasted them. Some have survived, and some have disappeared. Funny thing is, it is not always the natives who manage their resources well who survive, and being wasteful does not guarantee the humans will not survive.

My own feeling is that it is better to show respect for nature than to wantonly destroy it. You may call that a spiritual feeling, because I sure can't prove it is scientific. You could also call it Karma. Something rings true about people who are most boastful, and wasteful, and full of themselves falling hardest.

If we go back to the same time, about 1910, it was believed that the cod on the Grand Banks were so plentiful they would never run out. And we ran our fishing industry on that belief, until the cod actually ran out. Luckily, with our global system of commerce, we can continue to snack on fish that comes from China as easily as the stuff that used to come from the Grand Banks. And as species get depleted, instead of protecting them, we continue to eat them at a great rate. Bluefin Tuna is endangered? Great, I think I'll order some for my dinner. That attitude shows a lack of respect for nature.

I'm sure people have some natural instinct to be respectful of nature, but somehow it is being lost in our modern global economy. Maybe it is propaganda that has got us convinced to consume, waste, throw stuff away without a guilty conscience. Maybe if we had a chance to think for ourselves, we would be cautious, and take only what we need. It may also make us happier people. We are certainly not that happy in our consumer-oriented throwaway society.

But ultimately, we may need about a 70 year catastrophe to convince us to be frugal with out resources. And then, we can just pray for a second chance. Imagine that we ran out of oil for seventy years. Seventy years of hearing stories from our elders about the old days, when people drove Hummers "just for the hell of wasting oil". Then one day, someone finds a new, huge reserve of oil. Do you think it would take much to convince those people to take the bus or a train instead of a Hummer?
Copyright the Lost Motorcyclist