Phil the Alien, A Canadian Movie 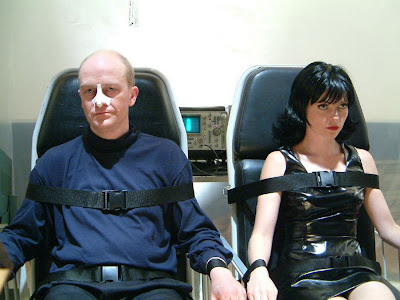 This movie is too Canadian to pass up. I would like to start a new Academy Award category: Movies where you wake up for no reason in the middle of the night and can't get black to sleep, and turn on the TV and say what the heck.

May I introduce, as Oscar nominee in this category, "Phil the Alien". Even in my half awake state of mind, with no introduction, I could tell two things about the movie within seconds. It was low budget. (later confirmed on the Internet at $340,000) And it was Canadian. (talking beaver the clue).

I don't want to do an actual review of the movie, (for that see the link above) but I would like to compare the American movie, Men in Black, and this movie which is sort of similar and occasionally pokes fun at it from a Canadian perspective.

The heroes in Men in Black are the U.S. Government agents, who hunt the aliens, and keep them under control. The hero in Phil the Alien is Phil himself, who ends up hanging around with a bunch of guys in a bar, and trying to avoid being rounded up and killed by government agents. That is a more typical Canadian point of view. In fact, the government agents seem to be linked to the US government rather than Canadian. Although the freelance assassin Madame Madame, is apparently Canadian.

Contrast the attitude toward guns in the two movies. In M.I.B., the new agent is presented with a huge array of weapons to choose from, even the smallest one having mega firepower. The guns are given a traditional "cowboy gun" role throughout the movie. i.e for killing people, and for pointing at people to make them talk, or just to intimidate them. In P.T.A. the guns look like either a plastic toy handgun bought at a dollar store, or regular hunting rifles. In one scene, the beaver is a sharpshooter and accidentally kills a bystander instead of the target. In another scene, a government agent points his handgun at a man to make him talk, and the man says "Go ahead an kill me. Just shoot for the head please." In other words, guns have a more realistic and less effective role in the Canadian movie than in the American movie.

Another difference between Canada and the USA is attitude towards religion. In Canada, you can get away with making off handed jokes about religion. In the USA, religion is not to be trifled with. At some point in the movie, Phil becomes a born again Christian. While he is spreading the word of Jesus, and simultaneously using some of his alien powers, such as levitating and telekinesis, some people become convinced that he is the second coming of the Messiah. Jokes like that do not play well to the large numbers of fundamentalists in the USA. And yes, it is a joke in case you were wondering.

Some reviewers have mentioned the lack of beautiful Canadian scenery in the film. I'm not sure what they were expecting, but the film was shot in southern Ontario where maybe half of all Canadians actually live, and we don't have that much great scenery, except Niagara Falls. And the Falls were actually featured quite centrally in the film, to the point where they become almost another in-joke.

Even this preview is kind of funny.

And the theme song

The entire movie is not on youtube, but here is one of the funnier scenes. I need to do a lead in though: the man (an alien) tells the woman that he is from another planet and wants to have thousands of babies with her, .... and now you are ready to watch the rest of the scene on youtube at this link: