Communist Propaganda of the Sixties 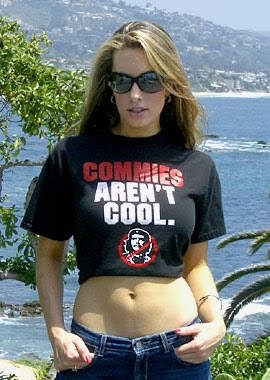 When I was in my early twenties, I spent three years with CUSO in Africa. And one of my eye-opening experiences was to come in contact with actual Russian Communists. The local hospital was funded by the USSR as part of their "aid" program. Actually their aid program was designed to extend their influence into all parts of the world, as the Soviet Union had plans for world domination. The Vietnam war was going at full swing at the time, and there was very little contact between "the Free World" (Us) and the "Red Menace" (them). It's hard to imagine for younger people, but we hated Communists back in the sixties as much as we hate Al Quaida terrorists today.

In our town in Sierra Leone, there was a free public hospital and health care clinic, including a dentist. Mostly paid for by the Communists, and staffed with a good number of Russian doctors and even some Russian nurses. The hospital also hired staff from Canada, and at the time, my wife was a lab technician from B.C. working at the hospital lab.

So I had a chance to get to know some Russians, although not really very well, as I did not speak Russian, and they did not speak English. Apparently it was Soviet policy to avoid sending English speaking Russians overseas to places where other people spoke English (like Sierra Leone). That minimized the chances for people to develop friendships with local people and try to defect to the West.

The Soviet language policy, like all others, obviously has its weak points. For example, the head Russian Doctor had spent some time in Algeria, and had managed to learn some French while he was there. I suspect this was the main reason he was transferred to Sierra Leone, where most people spoke English, and he did not speak English. However I spoke French, and so did a few other people. But for the most part the language barrier succeeded. The British, Canadians and Americans generally never hung out with the Russians.

Once in a while I would encounter some Russians at local bar, or at Hospital parties (which I was invited to as a courtesy because my wife worked there.) My first hospital cocktail party, I was not too keen to attend because I knew that it would all be in Russian and I wouldn't understand anything. Even the African doctors at the hospital spoke Russian, because they were educated in Moscow (another Communist foreign aid initiative). I went to the Hospital for the party and stuck close to my wife so I could have someone to talk to. But then she got called off for a medical emergency, and I was standing there alone. Then a couple of Russian guys came over to talk to me. There was the language barrier,of course. Well I quickly found out that in Russian you can skip learning the basic words for Hello, Goodbye, Thank You, and "Where is the bathroom". You only need to know one word of Russian, it is "Wodka", and it basically can be used in any situation. After learning the word for Vodka, I actually do not remember the rest of the party, or even how I got home afterwards.

Another time I met some Russians at a local bar, where we decided to sit together and communicate despite the language barrier. Once I managed to make it clear that I was not American, but Canadian, they decided to shift the topic of conversation to hockey. Apparently Russians really like ice hockey, and they were also brainwashed into thinking that Russia was the number one ice hockey country in the world, just because they always won gold at the winter Olympics. I managed to convince them they were wrong by using the words "Bobby Orr" which was apparently understood in Russian. This was before the Canada-Russia hockey summit of 1972, where Henderson scored the winning goal, but Bobby Orr didn't play.

The Russians liked to give me Communist magazines (written in English) to read. I guess they couldn't understand them anyway, so why not give them to me. I learned a lot about Russian propaganda in those magazines. I was always kind of amazed at how the Russians were so brain washed into loving Communism and hating capitalism, when Communism was obviously such a bad system. But by reading their magazines, I was beginning to understand how their brainwashing worked. It was a combination of fact and fiction, ultimately based on stirring up emotions of fear and hate.

Russians were brainwashed into hating Americans, by constantly reminding them of certain awkward facts, and subtly promoting negative stereotypes.

This is a sample of Communist propaganda back in the sixties and seventies.

One of the American T-shirt slogans of the day was "Kill A Commie for Christ", so I guess they were not too far off. Although the T-shirt might have been ironic, I couldn't be sure, and I don't think the Godless Commies "got it" either. You can still buy the mugs and T-shirts on Zazzle.com if you want.

Picture: American propaganda against Communism is not completely finished, here is a current website still stirring up hate for Communism. The Russians are out of it now, but anti-communist emotions are still targeting young Americans who are not sufficiently religious or conservative.