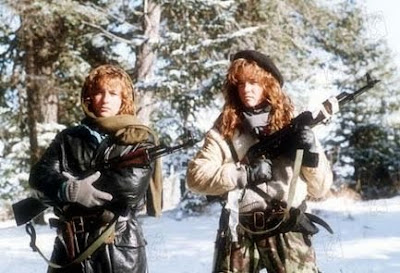 The Calgary Herald often proudly carried conservative points of view, and that is where I found this anti-Omar Khadr rant by Col. George Carsted.

He recounts how he was only 14 when he took up a gun against the Red Army as it approached his town. But although his action was similar to Omar Khadr, he feels no sympathy for him.

Here are some of his arguments, starting with the point that since he did not see himself as a child at 14, then neither was Omar Khadr a child at 14.

"I did not see myself as a "child." I may have been scared, but I knew what I was doing."

"He [Omar] did not fight for his country, but supported the aims of a fanatical segment of Islam, whose actions are abhorred by all having one ounce of decency -- regardless of religious affiliation"

"I deem it time for the introduction of a law that strips anyone, whether born in Canada or being a naturalized citizen, who commits an act of terrorism or takes up arms against Canadian troops or those of her allies, of that citizenship"

I would not call George a child "soldier" at 14, from the description he was not part of any military training, nor was he in an organized group. He was just a kid with a gun.

He says Al Quaeda is "abhorred by all having one ounce of decency", when the well known fact is that Al Quaeda was financed and armed by the US government to fight the Red Army in the nineteen eighties. Ironically, the same army he fought when he was 14.

But please, let's not introduce a law that blindly strips anyone of Canadian citizenship for taking up arms against Canadian Troops or those of her allies, because Col. George Carstead would be among those to lose his Canadian citizenship. He has publicly confessed (in writing this article) to taking up arms against the Red Army, which were our allies at that time, against the Nazis in WW2. Maybe if George had been a bit older, he would have known that to fight the Soviets in WW2 was to help the Nazis. But he was just a kid, and probably didn't know what he was doing, no matter what he thinks now.

It's not as easy as you think to write laws condemning someone for the very same thing you do yourself. Double standards are difficult to uphold in the Canadian legal system, and I like it that way.