The Subliminal Message of "Fair Game", the Valerie Plame Movie 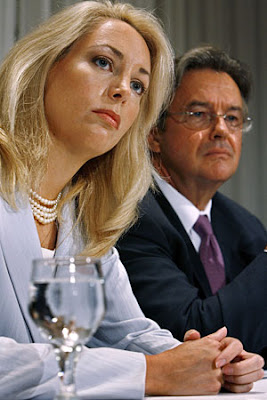 Here is a link to Roger Ebert's review.

I think it's fair to say that the subject of this movie, the controversy surrounding Valerie Plame and Joe Wilson, is at the centre of the biggest issue of the Bush administration, the decision to go to war with Iraq. This decision turned out to be wrong on many levels. I can list some of them here.

1. It left Afghanistan to the Taliban and let them regroup, and turn their defeat around.
2. It did not, as promised, make Iraq a friendly, democratic, capitalistic country.
3. It got thousands of US soldiers killed.
4. The strongest arguments for going to war in Iraq turned out to be either false or an honest mistake (depending on your political leanings.) These arguments were that Iraq had weapons of mass destruction, based on intelligence reports.
5. It cost the USA so much money that it weakened the economy, possibly accelerating the later near collapse.

To be fair, on the plus side, at least it got rid of US installed dictator Saddam Hussein.

But given that Iraq was on the whole a huge mistake, much bigger I think, than any of the other mistakes of the Bush administration, it would be useful to know if it was committed in error or on purpose. The treatment of Valerie Plame seems to hold the key to this mystery.

From watching the movie, you start to get the idea that covert CIA operatives are actually more vulnerable to pressure than regular citizens. Much of what they do is classified secret, and cannot be used either in a court of law or reported by the press. This secrecy is necessary to carry out their operations against opposing groups, but it makes them especially vulnerable to backstabbing from their own kind. This despite laws that supposedly protect them from being "outed", and despite the supposed patriotism of their fellow Americans.

In general, I guess spies and intelligence people are aware of their vulnerability and take pains to not ruffle feathers on either side. But Valerie Plame was married to Joe Wilson, a combative guy who may not have understood her precarious position, and went on a public attack of the White House and Vice President. In the counter attack, Valerie Plame became an easy victim, due to her sensitive and classified position within the CIA.

If the Republicans are right, that she was only a secretary, and she used her influence to land her husband a lucrative plum job flying off to Niger, then I guess the White House is morally right. But it is very difficult for Valerie Plame to fight back against these assertions, as an undercover operative. Any normal citizen could easily prove these assertions false (if they are actually false).

In the end I think it provides the best argument for the case that the CIA was indeed pressured to give the intelligence that Dick Cheney wanted, and that this intelligence was distorted into propaganda.

That it was so easy to destroy Valerie Plame's career, makes you realize that this could probably happen to any CIA operatives. One possible reason for destroying her career was to support the idea that the pre-war Iraq intelligence was an honest mistake. But the main reason I see for wrecking her career was to "send a message" to other CIA agents. The message is that they are not to question how the President uses the intelligence from the CIA. If that's true, it makes the CIA a tool of the White House, not a tool to get intelligence, but a tool to be manipulated into providing propaganda.

The Plame Affair is about all the proof I need to know that the CIA was manipulated into justifying a war that the White House wanted regardless of the truth. Unfortunately, it seems good intelligence is mutually exclusive to drumming up propaganda, so that might be one reason the war itself went badly.

This movie revealed many details that I didn't know about. I don't know how much of it is true, and because the CIA has classified so much documentation (apparently for 80 years) I'll never know. "Fair Game" so far has made less than a million dollars at the box office, and opened on only 46 screens in the USA. This, despite the fine acting, and a really great movie.
Copyright the Lost Motorcyclist