North Korea's Side of the Story, Hope this Helps 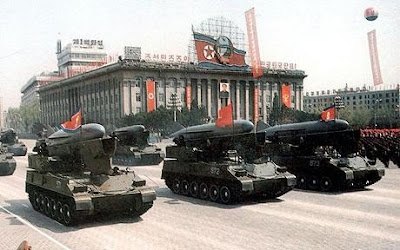 The recent military incident between North and South Korea may baffle some people. To hear the pro-west propaganda, you would swear that the North Koreans are evil bullies.

I would like to help clarify the extremely confusing situation. One problem is that we only hear one side of the story. Obviously, we don't get Pyongyang's Cable Network News station in North America, nor do we find the DPRK People's Daily newspaper at the corner newsstand. But surely by now these guys have figured out how to use the Internet to set up a website, and learned a little English to give us their side of the story.

I think I have found it here: http://www.kcna.co.jp/index-e.htm

Hopefully this is not a hoax website, because after all it has that .jp suffix that I assume means their service provider is in Japan. Maybe it was cheaper than any of the local North Korean Internet companies.

If you want to read the page for yourself, just remember DPRK stands for "Democratic People's Republic of Korea", and that is what most of us call North Korea (i.e. the bad guys), and what I assume Sarah Palin calls "South Korea" (because she said the North Koreans are our allies.)

So I am here to help English speaking people understand the North Korean side of the story. It could take a while, because first I have to to undo the years of hateful anti-North propaganda.

I am going to begin with the "Dear Leader". I have no idea why the people of the west make fun of this term. What part of "dear leader" do you not understand? He is a dear, i.e. darling cute, cuddly, sweet, helpful, lovable. And he is a leader i.e. He tells us were to go, what to do, what to believe. What more does a person need in life than a dear leader? You Americans have your own Dear Leader, whose name is Jesus Christ. But our dear leader is even better. (Hint, he has a pulse.) Aren't you people sitting around waiting for the second coming jealous now? I thought so.

Lesson two, where I explain the meaning of "Puppet Group". South Korea is not a real government, so for the sake of truth in advertising, we always refer to them as the Puppet Group. That implies that they have no independent thought, unlike the DPRK. The Puppet Group is forced to jump around according to the puppet master, who is the arch evil United States of America.

Now what good has the Dear Leader done for North Korea? For sure, we have avoided the epidemic of obesity that is afflicting the USA and their puppet states alike. Next we have provided millions of good paying jobs, with pensions, in the military and secret services. And we lead the world in coordinated mass flag waving ceremonies, and we produce the biggest posters in the world of our Dear Leader. Our country is the sole remaining paradise on Earth, unspoiled by terrorism, capitalism, and Evangelical missionaryism. We are the only country where the press tells no lies. And second only to Newfoundland and Labrador in percentage of popular support enjoyed by political leaders. (Newfoundland 93% for Danny Williams, DPRK 89% support for Kim Jong Il.)

Now let's deal with this military incident which has confused so many people. Why is puppet group groundlessly taking issue with the army of the DPRK over its due punishment meted to the aforementioned puppet group?

What happened was that the puppet group military recklessly provoked and taunted the heroic, but peace loving army of the DPRK. And although the heroes of the DPRK army have streadfastly resisted temptation to pound the crap out of the puppet group for about fifty years, this time they could take no more, and with tears streaming down their cherubic faces, they loaded their heavy artillery and pointed their guns at Yeonpyeong Island. After about ten minutes of pin point surgical retaliation bombardment, they had killed two puppet group terrorists, and neutralized many of the Puppet Group's terror weapons of mass destruction.

Then, the Puppet Group claimed DPRK had killed two innocent civilians. How typical of their lying ways!!! We cannot confirm or deny this claim, as our inspectors were not allowed onto the island. But if we have killed any innocent Koreans, we are extremely sorry for the Puppet Groups tactic of using their Korean civilians as human shields.

Picture: The DPRK Self Defence Force parading in front of the Committee for the Peaceful Reunification of Korea.
Copyright the Lost Motorcyclist