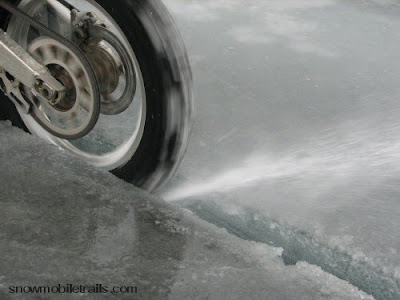 To Canadian motorcyclists, the characteristics of ice are a big problem. The expansion of ice causes bumps in the road every springtime. The expansion of ice means that you need to put antifreeze in your radiator (if you have one). The slipperiness of ice means we can't go riding most of the winter. And the fact that salt can melt ice, means that the road crews put salt on the road in the winter, which can cause rust and corrosion if it gets on our bikes.

Southern Ontario has been clobbered with some snow and ice in the last few days, officially kicking off the nasty phase of the motorcycling season. Although it was melting this morning, I can still see powdery white salt on the roads.

This morning I happened to witnesses a rare event, the breakup of the ice in the storm canal near my home. Ice breakups are very important in the spring, when the ice on rivers melts to the point where the whole ice surface breaks up and is carried off by the current. In the storm canal it was a smaller event, but probably took place in about ten minutes. Suddenly it went from an ice covered canal to clear water, with sheets of ice up to 10 metres long floating away.

The ice is here, we might as well learn something about it instead of complaining. This trivia question was brought up a few weeks ago. Every Canadian (and probably everybody who drinks Scotch on the rocks, but I don't know why they would do that) knows ice floats in cold water because it is less dense than the water. But would the ice sink if it was in hot water (or hot Scotch), since hot water is less dense than cold water? I used to teach Physics, and I must admit I don't remember this question coming up before, so I Googled it. It took a while before I finally found an answer at this link,

The confirmation of ice density is here.
http://en.wikipedia.org/wiki/Ice#Characteristics

At zero C, the water turns to ice, which instantly has a much lower density (.917 g/cc) than boiling water. Ice is less dense than any water, hot or cold, and so it will always float.

Next question is, why do pipes burst when they freeze? Well, we already know water expands as it turns to ice. The liquid expansion itself could burst the pipes if the water had no place to go inside the pipes before it changed to ice. But in general, there are places where the liquid water, can go before it changes to solid, so the initial freeze does not typically burst the pipes. But even in an open-air water barrel, the ice will eventually break the barrel. That's because the ice continues to expand a little as it gets colder, after it turns solid, and that expansion (as a solid object) will eventually crack the barrel.