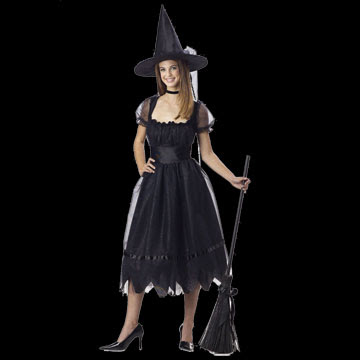 Just yesterday I read in the latest MacLean's magazine, an innocuous statement about witchcraft. I can't remember it exactly, but similar to "It may be hard for us to realize in a modern western civilization that some people in primitive superstitious countries still believe in witchcraft."

The fundamentalists don't yet tell everyone about their Witch Hunting Puritanism, but Sarah Palin, for example has been involved in an anti-witchcraft ceremony. So was another Tea Party candidate, Christine O'Donnell, who started off her campaign with with the statement "I am not a witch". Notice the difference between "I am not a witch" and "Nobody is a witch."

Why do Canadians, and even a lot of Americans continue to ignore the number of fundamentalists who believe in witchcraft, and worse yet, witch-burning?

"It's sad that the average professed Christian nowadays sees little harm in the evils of Harry Potter, Sabrina the Teenage Witch or Walt Disney's Satanic W.I.T.C.H. series. Woe unto America!"

"The Bible, God's inspired Word, condemns all of the aforementioned forms of witchcraft. Witchcraft by Biblical definition is seeking spiritual guidance, power, or knowledge from any source other than God and His holy Word. A witch is one who seeks or derives powers from the Devil. God hates witchcraft in every form... “There shall not be found among you any one that maketh his son or his daughter to pass through the fire [abortion], or that useth divination [psychics], or an observer of times [astrologers], or an enchanter [magicians], or a witch” (Deuteronomy 18:10). It is a serious matter to God. There's no such thing as “white witchcraft.” All witchcraft is rooted in rejection of Jesus as the Christ and the Son of God. Instead, witches worship hundreds of pagan deities, including the sex-perverted god of rape, Pan."

About the The 1692 Witch Trials

"Much propaganda has been circulated in recent decades to gain sympathy for witches in America, by focusing upon unjust executions and rigged juries."

It is not to gain sympathy for witches that we remember Salem, it is to make sure that never again are religions allowed to murder people for their imaginary magic.  The entire Puritan religion was driven underground shortly after 1692 and has remained there ever since. That's what should happen when a belief system promotes mass murder.  However the desire to resurrect witch trials and Puritanism has grown quite strong in the last couple of decades, as you can see from this web page.

Here are threats of further witch trials from this so-called Christian web page.

"We ought to obey the Laws set forth in the Word of God. Exodus 22:18 plainly states, “Thou shalt not suffer a witch to live.” The Bible mandates the death penalty upon all genuine witches, just as the Bible pronounces death for all abortionists, adulterers, murders and homosexuals. Get mad at God if you don't like it, because He said it. Salem, Massachusetts is in serious trouble with God for legalizing, encouraging, sponsoring and honoring witchcraft."

It really seems their only regret is that they didn't get the REAL witches. What are they going to do next time? Using actual evidence is not very likely when you accuse someone of devil worship.  Unfortunately, the only real evidence of a witch is confession, and the only way to get a confession is torture.  Coincidentally, torture is positively viewed by a majority of fundamentalist Christians. (Sorry to have to keep using the word Christian to refer to this type of person who is so obviously anti-Christian.)

Picture: We joke a lot about witches. If you want to buy this costume, go here. http://www.shoppingbattle.com/product/4/1042/Sparkle-Witch-Costume.html Thankfully, burning witches at the stake is still illegal. Let's keep it that way, and no this is not a joke.
Copyright the Lost Motorcyclist