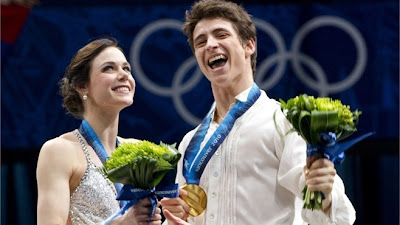 I have not written about the Vancouver Olympics yet, but I'm about to take care of that little oversight. And for you, Canadian sports media, commence ducking now.

First to congratulate Scott Moir and Tessa Virtue for their gold medal in ice dancing. I got to confess I just can't watch that sport any more since I saw Jessica Dube get hit in the face by a skate. I don't even know if they banned that particular dangerous move from the competition. But Scott is a relative of one of my brothers-in-law, so I feel obligated to write this.

Now back to the fun part, slamming the Canadian press.

My first criticism results from a game that the Canadian Womens' hockey team played early on, where they beat Slovakia 18-0. The Canadian press worked them over for scoring too many goals. My own opinion is that the Slovakians are big girls, they are in the Olympics, and if 18 pucks end up in their net, they just have to deal with it. Now I would have a problem if the Canadians were taunting them, yelling hateful things, etc. etc. But no, it was done in the finest tradition of sports. Somebody has to lose, and the Canadian team was obviously working up towards trying to win the gold. They don't need the added responsibility of making sure the Slovakians think they are a better team than they really are. On this one, the Canadian press who criticised our team earn a rebuke from me.

Next is the constant harping on the Canadians not winning enough medals. Apparently, our Canadian Olympic Committee started the slogan "Own the Podium", giving the impression that we would be the outright overall winner in these games. Really? Hey, I'm a Canadian, and I never for one second thought of that as being a serious commitment, or I would have started betting money on it (and I could get about 500-1 odds, I might add). No it was just a slogan. This is sports, we are up against teams from countries much bigger than ours with far more sophisticated drug programs. I only expect to compete fairly. Anyway we DO own the podium. As Mary Ann says, we will own it, but we should wait till the Olympics are over before we put it out for a garage sale. So another rebuke to the Canadian press: Drop it with the "Own the Podium" comments already. If you got your hopes up, think of it as a good thing not a problem.

So now it's pretty much established that the Canadian press is going to complain about our athletes whether they win, or lose, and probably also if they draw. I think our main problem is actually the press.

Now we come to something altogether different and unexpected. The CBC's coverage is so bad it is cringe worthy. It seems that for the first time, the CBC is not the official network of the Olympic Games, as the Canadian Television Network (CTV) outbid them. As part of the contract, it stipulates that no other Canadian network is permitted inside an Olympic venue, or to interview the athletes. So the CBC's Olympic coverage is limited to filming correspondents standing outside Olympic venues in the dark, all alone, telling us they are not allowed inside the games. It was funny for the first five minutes I guess. But this is what? the second week and they are not letting up. This morning I switched on the TV and there's the CBC reporter standing beside a dumpster outside in the cold, telling me he is standing beside a dumpster because he is not allowed in to the games. Next time they draw up that contract for exclusive coverage, they need to put a restraining order on the CBC crews, that they should not even be allowed in the Olympic dumpsters.

And one more show that I'm going to slam just because I never did like it. It's on Sun TV, called the "Casino Rama Grill Room", hosted by Gareth Wheeler. Its an irreverent look at sports, and Gareth himself takes the persona of an opinionated loud-mouth. Which may or may not be his real personality, I don't know but he makes it seem pretty genuine. Anyway I watched for a few seconds this morning, and one of his guests said (about the Olympics) that the problem is really with all of us here in the press. "Yes" I thought. "For once, these guys are on to something." But no, I was disappointed to hear that the "Problem" is we still cheer for our athletes even when they don't get podium finishes. So, another rebuke goes to the Casino Rama Grill Room, for making a stupid observation. You were right that the real problem is with the press, it's just not the problem you think it is.
Copyright the Lost Motorcyclist