Why has the Global Warming Debate Turned Political? 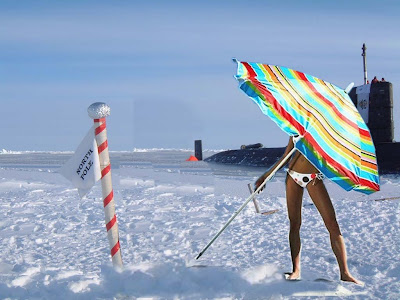 Why has Global Warming become a political issue more than a scientific issue?

Before going in to this, I want to say that recently, political parties on both sides have admitted that global warming is a man made problem. In the last US election, Democrats and Republicans both pledged to do something about Global Warming. However, the rank-and file conservatives, and the conservative political commentators on TV and in the press, have generally continued to call global warming a hoax.

With very few exceptions, global warming deniers are conservative. Those few liberals who deny global warming would need to be looked at on a case by case basis, but I suspect that most of them would turn out to be false liberals, or somewhat confused about what liberals stand for.

So why do conservatives call global warming a hoax?

Conservatives in the USA tend to be more religious than liberals, and are guided more by the bible than by scientists, especially when those scientists deny God's creations and deny the literal truth of every word of the bible. Conservatives sometimes refer to Global Warming as an alternate form of religion.

In the USA, conservative has come to mean "opposed to governmental control and opposed to taxes", especially since the rich are taxed more heavily than the poor. One of the most obvious solutions to global warming would be to use government regulations, oversight and taxation. So Conservatives would prefer that global warming be a hoax.


From an article by Richard S. Lindzen 1992, who is one of the most respected global warming skeptics, (and coincidentally a "smoking causes lung cancer" skeptic and heavy smoker)

"As Aaron Wildavsky, professor of political science at Berkeley, has quipped, "global warming'' is the mother of all environmental scares. Wildavsky's view is worth quoting. "Warming (and warming alone), through its primary antidote of withdrawing carbon from production and consumption, is capable of realizing the environmentalist's dream of an egalitarian society based on rejection of economic growth in favor of a smaller population's eating lower on the food chain, consuming a lot less, and sharing a much lower level of resources much more equally.'' In many ways Wildavsky's observation does not go far enough. The point is that carbon dioxide is vitally central to industry, transportation, modern life, and life in general. It has been joked that carbon dioxide controls would permit us to inhale as much as we wish; only exhaling would be controlled. The remarkable centrality of carbon dioxide means that dealing with the threat of warming fits in with a great variety of preexisting agendas--some legitimate, some less so: energy efficiency, reduced dependence on Middle Eastern oil, dissatisfaction with industrial society (neopastoralism), international competition, governmental desires for enhanced revenues (carbon taxes), and bureaucratic desires for enhanced power." 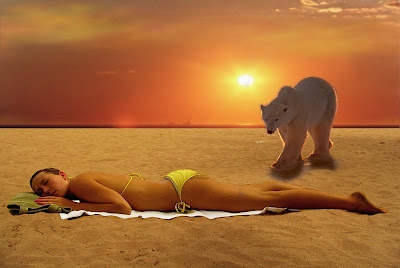 Conservatives have realized that any money put into global warming may be withdrawn from military budgets.

Conservatives, almost by definition, do not like to change, like to keep things the way they are. If we are going to do something about global warming, big changes are needed. Conservatives will generally oppose big changes.

Here are some examples of liberal opinions and goals that may make them more likely to do something about global warming than conservatives.
So, inside the scientific community, global warming is debated along scientific lines, but in the press and on TV the debate generally falls into a political alignment, with conservatives far more likely to call the threat of Global Warming a hoax.

Pictures: I photoshopped two pictures to illustrate the impact of global warming at the North Pole. Can you tell if it is winter or summer? (Hint, the sun is up) And what time of day it is? All time zones converge at this point, so take your pick.
Copyright the Lost Motorcyclist