The Mouse that Roared: a Prequel to Dr. Strangelove? 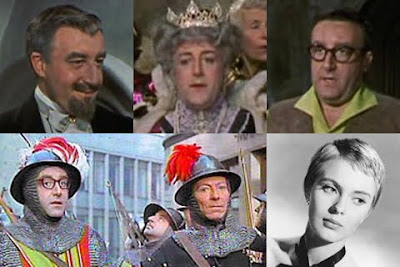 The Mouse that Roared came out in 1959. Coincidentally, the year I went to England, and I was 10 years old. I saw this movie on the ship going to England. It was memorable especially because our ship, the Sylvania, was shown in the movie, (at 3:47 of this clip) which cause quite a lot of commentary among the passengers. Actually, if you looked closely at the name, you could see the ship was actually the Ivernia, not the Sylvania, both ships were identical when painted their red, black and white Cunard colours in 1959, as shown in the movie. The biggest role for a boat in the movie was the one that carried the army of Fenwick to New York, and it was played by the Paladin, a Southampton tugboat, and also was the boat that pushed us in to the dock when we arrived in England. Even then the Paladin looked a bit old fashioned, today it looks like a museum piece.

The human actors included Peter Sellers, and Jean Seberg. And anyone who likes science fiction has a chance of recognizing "Dr. Who", William Hartnell, as Peter Sellers' second in command. The movie is a time capsule of ideas from the fifties, where America was basking in glory as the bastion of freedom in the world, and the generous victor who helped rebuild Japan and Germany. Although I noticed just a slight undercurrent of resentment in England, in that Britain did not benefit much or at all from the generous deal America offered to the losers. So this movie derives much of its British humour from the sentiments that were always a little below the surface of the general goodwill towards America of the fifties.

The main comedic device of the movie is a football sized (and shaped) doomsday device, capable of blowing up "North America and a little bit of South America too", which spends the entire movie activated in a hair trigger state, with a warning buzzer that goes off every time somebody nearby stumbles. The possibilities for mirth are endless, and the movie tries to exploit all of them.

Several quotes give a feel for some of the unintended irony of the movie.


General Snippet (U.S. Army), captured by Fenwick: I warn you, madam - I know the entire Geneva Convention by heart!
Grand Duchess Gloriana: Oh, how nice! You must recite it for me some evening; I play the harpsichord.

American General "Do you want it recorded in history that a nation of our size attacked the smallest country in the world?"

In 1964, Peter Sellers was in the movie "Dr. Strangelove". Attitudes had changed dramatically regarding "Doomsday devices" and regarding America in 5 years. Dr Strangelove is also on youtube.
Copyright the Lost Motorcyclist