The New Face of Militant Religion 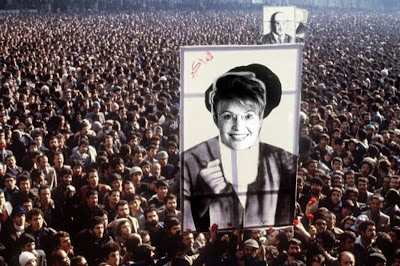 Mark Steyn wrote a book "America Alone" the end of the world as we know it. In it, he described the coming of the Islamic hordes who would sweep away all our democracy, rule of law, and freedom of speech, and reduce us to what they are, which I suppose is a fanatical religion fostering terrorism, bombing, suppressing women, and reciting the Koran endlessly while being beaten if we don't get it right.

OK maybe I over exaggerated the stark changes to come in society. My point is that these changes might be coming, not because they are forced on us by Muslims, but because we willingly submit to them from people posing as followers of Jesus, and an example would be Sarah Palin.

What does Sarah Palin stand for, by her beliefs and her public statements? Here are the "Seven Pillars of Palin".

1. Fundamentalist religion. I don't like to call it Christianity, because my Christianity does not include torture, and wars of aggression. Hers does. (I define that as Militant Religion)

2. Terrorist bombings. Sarah does not call bombings of abortion clinics "terrorism", at least according to one interview on network TV.

3. Wives are submissive to husbands, which is a significant part of her religion. Plenty of evidence exists of her husband sitting in the Governor's chair conducting state business in Alaska. She does not emphasise this point, and few reporters press her on the issue. But I believe that's what all Evangelical Christian Fundamentalist wives are like.

4. Beating children and memorizing bible verses, both of which are part of her religious beliefs. Again not a big political issue, you have to know the Evangelicals

6. War and torture (which I mentioned earlier) Ask an Evangelical what Jesus means by "Turn the other cheek", and "Let he who is without sin cast the first stone" and "Blessed are the meek". If you are an educated, tolerant person, you will be shocked.

7. Support for one party rule. Although she never condemned democracy itself, she is certainly not ready to accept a non Christian extremist "Terrorist sympathiser" winning an election. She has tacitly supported secession of both Texas (recently with the teabag movement) and Alaska (before becoming governor her husband was a member of the Alaska Independence Party) from the USA. If Alaska or Texas secede from the union because of Obama winning, are they going to be stupid enough to allow more liberals to run for leadership of their "free" states in democratic elections? Secession is nothing but a code word for one party rule by Christian conservatives. It is against all the principles of democracy to secede when your party loses an election. Democracy absolutely requires a "loyal opposition", not disloyal obstructionists, breaking up the country after elections, especially in a time of war.

In my opinion the real clash of civilizations is not between people of different skin colour, or different languages, or different holy books. It is between warmongering, moral absolutist, anti-intellectual, female subjugating, religious fanatics on one side, and on the other side, freedom loving, tolerant, pro-education, pro equality, democratic people all over the world. And this may be just my opinion, but I think that clash has been going on for as long as history has been recorded. With the invention of writing came the beginning of liberalism. But liberals do have a tendency to keep quiet while religious extremists a busy burning heretics.

In the last 200 years, liberals have gained the upper hand in many parts of the world. That's because, in the last 200 years, they have usually been able to express themselves without being locked up or killed. And it is America that has been, from time to time, the leader in a modern world of scientific learning, democracy, freedom, and tolerance. I believe its independence was framed by tolerant people who tried to lay a foundation for freedom of religion and democracy.

There are signs that this time of intellectual progress may be temporarily stalled in America. I hope some other countries can take up the lead, if America ever chooses to suppress freedom in favour of religious fanaticism. Don't assume it cannot happen, or that it never happened before. Just check the history books or Wikipedia for Puritans and slavery in America.

Picture: Sarah Palin superimposed on a poster of the Ayatollah (not sure which one)
Copyright the Lost Motorcyclist