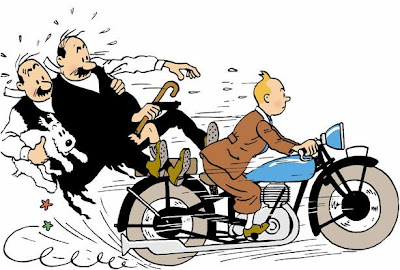 I have not written about language for a while, so as a change of pace, I will go into a story I heard on the CBC tonight. The Belgian comic book "Tin Tin" has come out with a Quebecois version. Just to fill in some background, Tin Tin is a world wide comic book that is originally in French, one of the official languages of Belgium. These books have been coming out as long as I remember, and I used to read them in the library when I was a kid, as I could not afford to buy them. They were hard cover books, not the 10 cent paper cover English comics like Superman and Bugs Bunny. Tin Tin is now translated into a wide variety of languages. And recently they have embarked on profitable marketing technique of "translating" Tin Tin into various local French dialects such as Tahitian.

The CBC report was about the Quebecois translation, which has apparently received a frosty reception in Quebec. While most of these local versions have been so successful as to sell out almost immediately, the Quebec version sold only 10,000 copies so far, and has actually turned off more people than it has charmed. The publisher admits that it might have been a mistake, as it not only has resulted in lower than expected sales, but it has somewhat diluted the brand image of Tin Tin in Quebec. Or at least that's what I could pick up between the lines from what I read.

So what's the turn off? Why wouldn't Quebecers be thrilled to read a book in their own special dialect? Well there are several reasons. First off, Quebec French is not a regional dialect, as Quebec is large enough to actually have several regional dialects. Now if the publishers had recognized that fact, and put out several versions, one for each region of Quebec, they might have had the sales success they were looking for. Instead they put out a mishmash of Quebec slang that really does not appeal to anyone. Furthermore, the language of Tin Tin, and the special mannerisms and words of each of the characters are so well known to French Canadians that it would be a travesty to change them.

For English speaking people who have some trouble imagining the effect, would you like to read "Yabba Dabba Doo" done in Canadian? How about Fred Flintstone saying "Take off, eh?". That may appeal to you enough that you would like to buy it and read it to your kids, or you may be tempted to just buy the real Flinstone cartoon after the shuddering subsides. If you're not convinced, how about William Shakespeare "To be or not to be, eh?". No, I don't think that would sell well in English Canada.

Why do English Canadians care whether or not French Canadians want to buy this "Quebecois" version of a Belgian comic book? When I looked it up on Google (in French), the first news article I came across was in the National Post! Of course, the National Post never fails to pick up a story that pokes fun at Quebec. OK they might occasionally miss story where democracy in Canada gets dumped, but a story about Quebec French will never fail to excite some of its readers.

All the comments, when I looked, were along the lines of Quebecers are always whining about something.

My response to all the National Post commenters would be, if you want to stop thinking that Quebecers are always whining, then stop reading the National Post. The Globe and Mail has better news and well informed opinions.

But there was one comment in particular from someone claiming to be a proud French Canadian, whose parents moved from Quebec to Ontario to "mercifully, drop the sycophantic habit of licking the french boot". I was puzzled at first whether this might be an attempt at parody. The weirdest claim made was that "In fact, linguist know full well that "joual" is closer to the Scottish Gaelic than it is to Parisian (oh, sorry!) International French."

That was a claim that I have never heard before, so I decided to look up a little "Scottish Gaelic" to see if I could find a bit of a resemblance.

The Gaelic phrase is actually pronounced starting with a "K" sound, just like the French expression, and so I might be tempted to think that French itself evolved from Latin being mixed with a little Gaelic, which was a common language of the Celtic people who lived in Scotland, Wales, Ireland, and France many years ago. So yes, there is something to the claim that Quebec Joual sounds a bit like Scottish Gaelic, but certainly no more than Parisian French.

There was also a claim made in the article itself, by Yves Laberge, a Quebec City sociologist who adapted the text of the Tintin book, who said "Some people want to believe that we speak exactly like in Europe, and others realize that it's not quite the same"

I actually do not know of anyone who believes that Quebecers speak exactly like in Europe. That may be hard to prove, but if almost all Quebecers have at least heard a French (from France) movie once in their lives, they should know that it is not exactly the same. Some of the words such as words for car parts, differ from France much the way car parts in English Canada differ from our mother country. Do you lift the "hood" or the "Bonnet" Do you have a spare tire in the boot or the trunk? And even greater differences when it comes to swearing (I mean foul language).
Copyright the Lost Motorcyclist