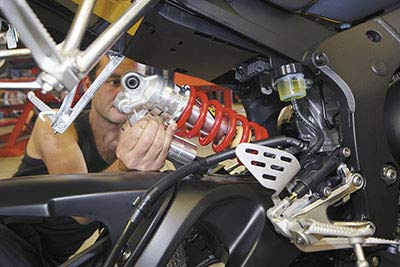 After suffering with a condition that made riding painful, I am now even more aware than usual of the benefits of a motorcycle rear suspension to smooth out the bumps on the road. Why these days, even bicycles have suspension systems, and that was unheard of when I was young. There is also a Wikipedia article on motorcycle suspensions.

Recently, an advertisement for a motorcycle air suspension system caught my eye. Although this suspension is not actually available for the Vulcan 900, if the accessory was right, why not get a new bike to fit it? But first, is that accessory worth it, and will I be able to ride comfortably again?

I have had experiences that made me aware that accessories are not always as promised, so I am a real skeptic of manufacturers claims. This particular system is an air spring/shock absorber, a compressor pump, and handlebar switch to control air pressure in the spring. What I like about it is the fact that there is a handlebar control, which presumably means that you could change the pressure while riding.

The way a suspension works is by allowing the rear wheel to move up in reaction to hitting a bump in the road. A spring holds up the back of the bike, and as the rear wheel hits the bump, it moves up quickly, which compresses the spring. How far it moves up, and how much the spring is compressed, depend on a lot of factors such as spring stiffness, the weight of the bike being held up by the spring (i.e. not including the weight of the wheels themselves), and damping stiffness. The greater the sprung weight, the slower the bike will move up. The softer the spring, the less the back will move up.  Spring stiffness is measured in lb per inch. A 100 lb per inch spring will compress one inch with a force of one hundred pounds. Finally, the less damping, the less the back will move up, although it will continue bouncing up and down more after the bump.

Motorcycles have very little sprung weight compared to cars. So there is not a lot of mass to absorb the bump, unless you yourself are a real heavyweight.

Now to consider some of the design issues of an air spring, which is a rising-rate spring, meaning the deflection resistance force (in pounds per inch) increases as the spring compresses. I don't see a problem with that, as long as it is understood that the spring will get more harsh as you let out air (unlike a car tire for example).

On an air spring you make the ride softer with a bigger air chamber. I don't know of any accessory air shocks that have variable chamber size - other than the natural change in size that happens each time you hit a bump in the road.

The damping mechanism is very important to the ride quality, and with these aftermarket accessory air suspensions, I don't know how good the damping is. You might assume very good, with a system costing about $1500, but I don't know for sure. The damper (sometimes called the shock absorber in a car) is the part of the suspension that dampens or slows the motion of the wheel, usually using a piston driven through oil or some variation of that. Without a good damper, you may either have a harsh ride, or you may have a wheel that hops over the road surface. Only a good quality damper will be able to give a smooth ride AND keep the wheel glued to the road. Those top quality dampers usually cost a thousand dollars all by themselves.

What makes me a bit suspicious is the fact that most of these air suspensions are available for Harley Davidsons, and usually their owners are not too interested in ride quality. What they want is the ability to drop the suspension so the bike is practically dragging on the ground. i.e. They want it for show.

Another problem with air suspension is air leaks. Sure, you can keep on pumping it up, if it has that thumb switch. But how often will it be springing leaks. There's usually a good reason why the motorcycle manufacturers don't fit these to all new bikes. Making a good reliable and effective air suspension is not as easy as it sounds.

You do see a lot of big trucks with air suspensions, and Bob was telling me a story about a friend of his, a long distance truck driver, who called him on a cell phone because his truck was losing air. When a truck with air brakes leaks air, it has to stop, as the loss of air will activate the brakes. So he was stopped at an offramp. When Bob showed up with some tools he could not see his friend, although as he walked around the truck, he eventually heard him calling for help from underneath. His friend had crawled under the truck to see if he could spot the leak, and as he was looking, the air suspension settled on him, luckily not crushing him, but he just couldn't get out. Metal springs don't do that. Actually this situation probably would not happen on a motorcycle either.

My 1982 Honda GL500 had a hybrid air suspension. It was an air boosted metal spring. To adjust the air pressure, I had to use a tire pump, not an on-board air compressor. I don't know why exactly, but it did have the smoothest ride of any bike I ever had, and it was also a really good handler on the corners too. It also happened to have a "Pro-Link" system, which is a single rear shock with a rising rate linkage, very similar to the system I have on the Vulcan right now, except for the air spring booster.

My BMW motorcycle had a very good suspension too. No rising rate linkage, no air bag. Just a single shock absorber mounted on one side of the wheel. It was also a one sided swing arm, that was strong enough that it never deflected or wore out in all the time I had it, 150,000 km and 15 years.

The BMW was the only motorcycle I had that came with a screw to adjust damping rate. I must have had the bike for about ten years before I decided to try fiddling with the adjustment, which was on the rear only. One reason why I left it alone for so long was that it was a very good suspension. On my first test run on the bike, I had gone over a railway level crossing at much too high a speed, and hardly noticed it, compared to the jolt I felt on my previous bike.

The first time I adjusted the damping was before a long trip to Quebec, I decided to try twisting the screw to minimum damping, just to see if there was any difference. For the first day's ride with minimum damping, it felt a bit softer, but not an extreme difference. Once I got into the mountains in Quebec, and the road got rougher, and the speed picked up, I began to notice something new and a bit scary. If I hit a big bump at high speed, my butt bounced right off the seat. It was happening so often, that I was beginning to stand up as I approached each bump. For some reason, it never occurred to me until the next day, that this was in any way related to me turning the damping to minimum.

Next day, before heading back homeward, I turned the adjustment back to centre. I immediately felt the difference as I pulled out of the motel parking lot. It was a slightly harder ride. But I never had my rear end bounce off the seat after that. So that was a good lesson to learn.
Copyright the Lost Motorcyclist