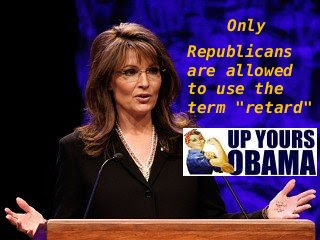 I have gone over double standards before, but with a new story about Sarah Palin, I think I need to cover the issue again.

Having a double standard means that it is OK for you to do something, but not for someone else to do the same thing. A Double standard is the opposite of the basis of Christian morals, summed up by "Do unto others as you would have them do unto you".

In this case, we take a self proclaimed Christian, Sarah Palin, who denounces a White House staffer for using the term "retard" in a derogatory way. Since she has a retarded son, presumably this comment would be seen as a genuine expression coming from the love she has for her baby. And I think any liberal would sympathise, although Sarah Palin, as a conservative, may be suspected of trying to score political points with her baby.

However, evidence that Sarah Palin was exploiting the handicap of her son for political gain was not long in coming. Rush Limbaugh, the unofficial leader of the Republicans, later made several derogatory comments on radio about "retards". All Sarah Palin had to do was denounce Rush's use of the term equally, and she would have gained some credibility in the eyes of a lot of fair minded people. Instead, she said he was using satire.

So her logic goes, because Rahm Emanuel said "retard" in a private meeting, it cannot be satire. But because Rush said it on his public radio show, that counts as satire. The PR experts probably considered using the argument that only retards are allowed to use the word retard, but rejected it. Sarah Palin, the mother of a retarded child, gains sympathy for defending him against a Democrat, but apparently does not have enough motherly instinct to tell Rush Limbaugh to his face that he should stop using that word.

I probably would not have written about this at all except that Sarah Palin railed endlessly during the campaign, that Barack Obama "palled around with terrorists", another double standard. This accusation was based on a bombing that took place forty years ago, by someone associated (at least 2 degrees of separation) with Barack Obama. Then when she was asked if bombing an abortion clinic was terrorism, she said no, she would not call that terrorism.

Ignorance, I can excuse, and no doubt Sarah Palin is ignorant of many important issues. But I rate hypocrisy worse than ignorance. Knowledge can be learned or outsourced by a leader, but not moral standards. I suppose I could myself be accused of hypocrisy ("Judge not lest ye be judged": Jesus), but at least I try to maintain a uniform standard. A uniform standard, or lack of standards, is commonplace among tolerant liberals. On the other hand, you could infer that any member of a religion that accuses others of devil worship, and says non-members are going to burn in hell, would be kind of intolerant.

My feeling is that intolerance leads to double standards. Like "Christian" missionaries running a child trafficking ring are doing God's work. But Buddhists doing the same thing are criminals.

I would prefer that everybody be judged by the same standard, or not judged at all.
Copyright the Lost Motorcyclist