Little Light at the End of the Tunnel for Toyota 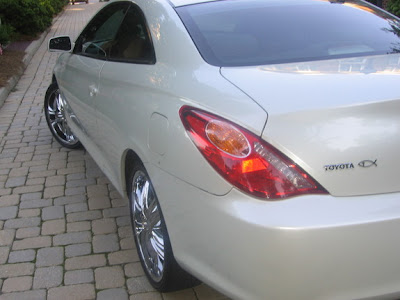 Some new ideas have been coming out about Toyota's problems, so just to do an update.

First, many Toyota owners have been discouraged about the resale price of their vehicles. Apparently somebody figured out that there has been a 4% drop in resale value of Toyotas that can be blamed on their acceleration problems. I'm not particularly worried, as generally I drive a car into the ground. And Toyota resale prices were probably a little too high anyway. When I bought my Toyota, I could get a new Matrix cheaper than a used one. The used one had some extra features, while my new one was the base model with no options, but still, I won't pay more money for a used car.

I think Toyota is going to have to change their image a bit. I used to think this was the car grandmothers would drive, and all the young, hip, people were driving the "Zoom Zoom" Mazdas. But with the throttle problems everything has changed. Toyotas are now the cars for the thrill seekers, the risk takers. Mazdas and Hondas have become the cars of choice for grannies,nannies and soccer moms. If I might suggest a slogan for Toyota to go with their new market demographics: "Oh what a feeling and get the **** out of the way!". Mazda is obviously going to have to come up with a new slogan, as "Zoom Zoom" just makes them look like they wish they came up with the stuck throttle idea first.

A few people have been posting their own thoughts on youtube about what might be causing the unintended acceleration. As far as I know, Toyota has never really been able to prove what was causing this. The floor mat theory was obviously just guesswork, because by the time they checked the wrecked car in the Santee crash, the floor mat was not actually blocking the pedal any more. And of course, there was nothing wrong with the engine control unit (ECU) or the throttle pedal mechanism either. (or the brakes, except for being burned out from being dragged at 180 kph for five or ten minutes.)

One idea put forward was radio frequency interference, for example from a cell phone. Toyota throttles now operate on a principle similar to modern airplanes, which is called "fly by wire". Instead of a push/pull cable going to the throttle, there is an electrical wire from the gas pedal to the ECU. The ECU is a computer that actually controls the engine speed. The ECU interprets a signal that comes from the pedal to decide what speed is desired.

The idea is that if the ECU were to receive a "fake signal" or interference from a cell phone (for example), that once in a while the cell phone signal may match a digital signal, and the computer may interpret this as an order to set the speed at maximum acceleration. This theory is reinforced by the notion that the FCC no longer requires RF shielding on many electrical components. And the airlines worry about RF interference enough to tell passengers to turn off their cell phones while in flight.

This theory could explain why Toyota has not been able to trace the problem, if it comes from random external radio frequency interference. But, Toyota does have RF shielding on their ECU. Secondly, I think the signal from the pedal to the ecu is probably analog, not digital. And even if it was a digital signal, and vulnerable to interference from random cell phone signals, you might expect that at least half the time it would result in a sudden deceleration. As far as I know, no "sudden deceleration" problems have even been reported. Anyway, I'll let the people at Toyota mull that one over, if they haven't already thought of it.

Some other youtuber dropped the throttle pedal mechanism in freezing water, and put it in an oven at 250 deg. F, and it continued working without sticking both times. Basically what you would expect from Toyota.

I'm sure when Toyota was doing this kind of testing, that they were probably looking at the signals coming from the wire, and not just checking if the pedal was sticking or not. Yes, I am pretty sure Toyota does this kind of testing, because you don't build a car that works this well without doing some serious testing. Even American carmakers do that.

Since almost all these problems are happening in the USA, I decided that Toyota needs to explain the problem in a way that some Americans understand better than science. For the people who believe in pacts with the devil, evil spells and miracles, offer to install a fish symbol on the trunk of their cars. And certainly remove any of those fishes with little feet and the word DARWIN inside. To help avoid any future problems of sudden unintended acceleration, advise them to read the Toyota owners manual literally, as if it were the inspired word of God (especially the part about how to shift into neutral, and how to shut off the engine). Tell them if they have any more problems with their Toyota, it will be taken as indication that they have made a pact with the devil. That should cut down on the complaints.

To wrap up this episode of the Toyota saga, our Prime Minister, Stephen Harper has decided to hold his own inquiry into the Toyota throttle problem. I was not aware that any of these problems had happened in Canada, but Stephen seems to feel better if he is mimicking stuff happening in the USA, so let him have his fun.
Copyright the Lost Motorcyclist