The Joy of Cross Country Driving 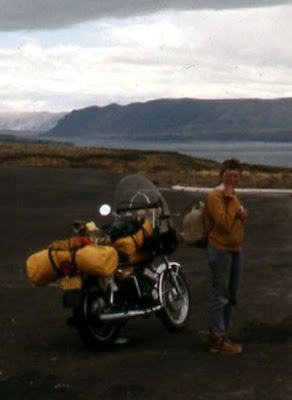 Most of my all time favourite trips have been cross country motorcycle trips. Although it sounds like they may all be the same, that is not the case at all. This is about my second cross country trip, in the summer of 1974. I was living in Sept Iles, Quebec, pretty much at the end of the road going north east. I know that the Trans Canada goes all the way to Newfoundland, but not on the north side of the Gulf of St. Lawrence. Sept Iles was the end of the road in those days.

I spent the winter preparing for the trip, based on lessons learned from my summer of 1973 trip, where I had gone as far as Saskatoon, Saskatchewan. First lesson, pack stuff in real bags, not garbage bags. Second lesson. Get a decent jacket, and don't leave it with your Aunt in Montreal, figuring you won't need it again now that you are in the southern part of Canada. Fourth lesson, don't go north of Lake Superior, it's cold and there are mosquitoes. Fifth lesson, take lots of spark plugs.

In those days before the internet, I did my research by sending an actual letter to each province and state we planned to pass through. Although much slower than Google, it worked, and I allowed lots of time.

During the winter, in preparation, I did an overhaul of the trusty Yamaha 250, putting in new piston rings and cleaning the carbon out of the engine. A remarkably simple job, compared to doing a four stroke engine of the same time period. But I was actually quite new at this stuff, and really took my time. I did it in just under 2 months. A professional mechanic, working to a flat schedule would do it in an hour. But I was really happy when the bike fired up and ran flawlessly in the Spring.

The day we started our trip, the bike was loaded down with all our camping supplies, and clothing for the next month on the road. We were heading out of town on July 2nd, a warm sunny day. Riding past the school that would stand empty for the next couple of months, the bike was running good. Yes, that was quite a feeling.

For the first week or so, we took our time. Stopping to visit friends and relatives along the way. But the pace began to drag somewhere between Murdo and Kadoka, South Dakota. I had never heard of either of these towns before, despite all my pre-trip research. And at our pace of 250 miles a day, this is where we were after more than a week of driving. On checking the map of Canada, it seemed like we might not make it to BC and back before September. So I decided to pick up the pace. The only problem was the sore behind that resulted from sitting on a hard, thin motorcycle seat for 9 hours a day. So I stopped at a hardware store and found a foam mattress. I rolled it up and tied it to the seat. Now I was sitting about the same height as a modern day Paris Dakar race bike, but it must have been twice as comfortable. I still marvel at that BMW K1100LT seat that I could sit on for 20 hours a day and basically feel nothing. But back in 1974, I did not dream that such things would ever be possible.

By going more like 450 miles a day (700 km), we gradually got closer and closer to BC with each passing day spent in some convenient KOA. We got used to putting up and taking down the tent in about 10 minutes. Once I remember an old woman (she was probably 30, but I wouldn't call someone 30 old today) coming over to remark on our campsite. "How did you pack all that stuff on that bike?". It seemed easy enough to me. We rolled all our clothes in thin sleeping bags, stuffed them in a bag and draped it over the tail light. The tent was strapped to the gas tank. Hardware such as my hatchet and camping equipment went in a haversack I carried on a shoulder strap sitting on my lap. The tire pump was strapped to the windshield. We carried basically no cooking equipment except an axe and matches. We ate at McDonald's where possible, and rarely cooked our own supper. But when we did, it was a can of stew over a fire, held by pliers and stirred with a tire iron.

We had some problems with rain. Twice our tent came down. Once, we dragged the whole mess to high ground near the flush toilets and stayed there. The next time, on the way back east, not only did the tent come down on us, but the motorcycle too. I got out of the tent in my pyjamas in the driving rain to lift the bike off the tent, and flipped it over on the other side. It seemed like I had pitched the tent in a dry creek bed.
Copyright the Lost Motorcyclist