Why Not a Smaller, Cheaper Motorcycle? 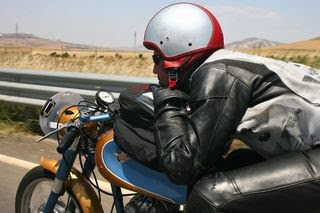 While I was in the hospital, I was reading the June 2005 Cycle Canada. It had road tests of a couple of interesting motorcycles, and I noticed in their specs, one appalling number. It was the fuel efficiency. The motorcycles were the 2005 Honda VTX1800N at 7.5 l/100km and the 2005 Yamaha Roadstar Midnight Silverado Canadian Special Edition at 6.7 l/100km. The second bike was a little better, and the engine a bit smaller at 1700 cc.

With these bikes, not only is their fuel efficiency in the same range as my Toyota Matrix, but so is their suggested retail price.

If anyone needs to know why American and Canadian consumers are in debt, and the price of oil is through the roof, you only need to ask people why they continue to buy ever bigger bikes, and avoid the 400 cc class of bikes. At the same time as you are running your psychological testing, you may just want to ask a few other questions like: Did you pay cash, if not how much down and what interest rate?

Don't get me wrong, I like a big honking motorcycle as much as the next guy. But I would consider several things in my purchase that other buyers apparently don't care about. First, can I afford it? By my definition, I can't afford it if I have to borrow the money to buy it. I can understand that people sometimes have to buy cars on credit, but a car can be justified as transportation, not a motorcycle. Yes, you can use a motorcycle for transportation, but that argument is delusional if you already have a car, or could buy a nice new car for less than the bike.

Another issue I would look at is the fuel efficiency. A lot of people just don't care about it, and that's why bikes are being designed and sold whose fuel efficiency is pitiful. Their owners like to brag about the power or the torque of the motors and how good that makes them feel. What makes me feel good is not wasting fuel, and any motorcycle that can't go as far on 10 litres of gas as my Toyota, is wasting fuel just as surely as if it had a hole in the gas tank.

By comparison to these hulking bikes, my 2007 Vulcan 900 with about half the engine size, gets between 3.9 and 4.7 l/100km. This is not really spectacular, but at least it beats my car, while the purchase price is also about half of the cost of the Toyota Matrix. This, I would consider reasonable for a big bike. But once a bike gets to be more than the car on price and fuel consumption, I'm starting to think someone is playing me for a sucker.

I have actually once owned a bike that got ridiculously poor gas mileage, it was my 1972 Yamaha 250. However that bike, if you ran it slow, could get consumption down to 3.5 l/100km. But the way I normally cruised it was about 7 l/100km. Anyhow the purchase price was very cheap, and so was the gas in those days. Back then I didn't even think about asking for fuel efficiency numbers, I just figured that a 250 cc bike would not use that much gas, I was wrong.

You can't just go by the size of the engine to determine the fuel efficiency, obviously. The stated size of the engine is the total size of all the cylinders, or technically the area of the piston top multiplied by the length of the piston travel. Normally this would be a good indication of how much fuel is sucked in to the engine on each turn of the crank. But many factors can change the theoretical or the practical on-road fuel efficiency.

Among the theoretical factors is the engine speed (Actually, crank speed in rpm) compared to road speed in top gear, the faster it spins at a given road speed, the more gas it sucks in. This depends on the gear ratio of the vehicle. Another consideration is supercharging or turbocharging, both are ways to get more than 1000cc of fuel into a 1000 cc engine, using a pump instead of atmospheric pressure. My Yamaha 250 was another example of "cheating" because a two stroke gets twice as many power strokes as a normal engine, so even though the pistons were 250 cc, they worked like a 500 cc four stroke. (To be more accurate, like a 375 cc four stroke, because of the holes in the walls of the cylinder near the bottom).

Then we have engine management, basically how efficiently is the gas burned? Any unburned gas going out the tailpipe is just like unburned gas going out the tailpipe. i.e. a total waste. Two stroke engines lost a huge amount of gas out the tailpipe, and did it mostly at high speed to help keep the engine cool, apparently. That's one reason why they ran so much more efficiently at low speeds. Any good, modern fuel injection system will be more efficient than an old fashioned carburetor, so that's another item to consider.

And finally, we come to the vehicle itself, where low wind resistance is important on the highway, and low weight is more important in the city to get better fuel efficiency.

One last point, and that is to address the perceived problem of smaller engines, that don't have enough power for some people. Mary Ann's Burgman, with 400cc can cruise at 120 km/hour, consuming 4 l/100km. You do not really need to go faster, as this speed (which is is technically illegal), handily matches actual traffic speed. Maybe you live where there are steep hills, maybe you need to accelerate hard to get on to the freeway. Most people could learn to use the gearbox better, shifting down a gear or two makes a lot of difference. And I would suggest that if you could drive with a little more anticipation, you would often eliminate the need to play "catch up". In other words, speed up a little before you get to the bottom of that steep hill, or maybe get on the gas a little earlier on the on-ramp. Yes you will have to learn to corner a little faster, but it's better than wasting gas on the entire rest of the trip. And the best place to learn all of these power increasing techniques? On a small motorcycle.

Picture: Taken at the Motogiro America, a "race" with 175cc and under bikes, a common technique of reducing wind resistance is leaning down on the gas tank.
Copyright the Lost Motorcyclist