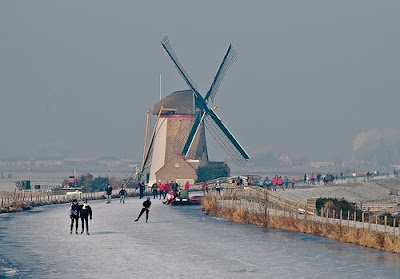 I must start with a disclaimer, that although I am Canadian, and theoretically should not care whether Sven Kramer is an A-hole or not, I am married to a woman who, though born in Canada, is of Dutch descent. So I am going to be using my personal insight into the Dutch character, along with my background in dealing with two languages, and the problems that arise from translations to help me.

The videos of the interview have all been taken down from youtube, which is really too bad as I never saw them and I am relying strictly on second hand accounts. So briefly, Sven Kramer won a gold medal for the Netherlands in the Olympics, and following the win, was interviewed by an American reporter from NBC. The actual wording of the start of the interview went something like this.

NBC reporter: "If you can say your name and your country and what you just won here."

Kramer: "Are you stupid? Hell no I'm not going to do that."

Speaking later in a Dutch interview, Kramer explains: "Come on, this is ridiculous. You've just become Olympic gold medal winner. She was there when it happened and then you have to sum up your whole biography, etc. She's crazy."

Predictable Outcome: Sven Kramer is now better known in the USA as "the guy who says 'are you stupid'", than the speedskater who won a gold medal. And by a strange twist of fate a week later during another event, one of Sven's skating coaches, gave him an incorrect lane change signal that cost Sven the gold medal. Whether that was deliberate or not I'll leave for another day.

I am fully aware that I do not know what speedskating event Sven was in, or even who he won against. But to be fair, I have a greater interest in the subject of "insulting people in foreign languages" than I do in speed skating.

Let me start with one of my other specialties, "The Dutch National Character". And for starters, here would be a typical Dutch reaction to that statement: "Are you stupid?".

And that may in fact be all you need to know about the Dutch character. Number one they speak directly, and this is true whether they are speaking their own language or one of several others in which they are probably also fluent. Secondly, they are well known for not embellishing the truth with flowery phrases.

Now getting back to to Sven with the "Are you stupid?" comment. Sven was actually being very polite by putting the word "Are" in front of the word "you". By doing so, Sven is probably aware that his comment does not make a statement about the reporter, it is simply asking a question. The reporter is free to answer "Yes" or "No" or "I don't know". If Sven was trying to be obnoxious, he could have simply turned the words around and said "You are stupid" and end the interview right there. And that would probably have been more to the liking of the NBC reporter and the American public.

I think the Canadians could learn a lot from the Dutch in this area. For example, when an American reporter came to the dressing room of the Canadian Women's hockey team after they won the gold medal, and asked them to come back on to the ice for a few more pictures, the correct response would have been "Are you stupid?". Instead, the women emerged from the dressing room, posed for some pictures, and then one of the American reporters ran off to the IOC committee to report a breach of etiquette and morals, as apparently it was indecent to bring the celebration out to the sacred Olympic ice. And so, the Canadian team was required to make an apology for their bad behaviour, while the US press had a field day with a great story that was far more interesting to Americans than the story of their team losing to Canada.

Now to tell a different story, one that helps once again to understand the Dutch character. This time Mary Ann and I took her Dutch niece to Niagara Falls. She was visiting Canada for the first time. Typical of of younger Dutch people, she spoke very good English. So we went down the ramp for a cruise on the "Maid of the Mist" which is Niagara Fall's most popular tourist attraction (not counting the actual Falls). On the way down, we were stopped by the staff and told to pose for a picture. I told them we were not interested in buying pictures. They responded "The pictures are included in the price of the ticket". I'm sure Katrein understood what they said perfectly, just as I did. We had just been told that our boat tickets included a complimentary picture. So at the end of the cruise, we actually paused at the photo booth and Katrein picked out our free picture, and she was told "That'll be $35". She immediately dropped the picture back on the counter, said "I'm Dutch", turned and walked away.

Now you could substitute many, many phrases in there. First, in case it is not obvious, we were simply lied to when they asked us to pose. Although this may be acceptable behaviour in North America, it would not be acceptable in Holland, apparently. Instead of "I'm Dutch", she could possibly have used the alternate phrase "Are you stupid?". Because in Holland, only stupid people would lie in such a blatant way.

So Katrein had a better answer, which wasted no words in stating that although the Maid of the Mist staffers may have tried a stupid trick on us, she, being Dutch, was certainly not stupid enough to fall for it. And my advice for Sven Kramer: You could have answered the NBC reporter the same way, and she probably would not think it was an insult.
Copyright the Lost Motorcyclist