A Second Look at the 2010 Honda Shadow RS 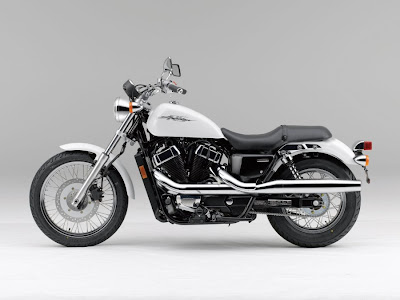 Two jobs I wouldn't mind having. One is a designer for Honda motorcycles, specifically in the "Style" department, since I assume they also have designers for engines, brakes etc. The other is a motorcycle journalist. In this blog, I can do both in a way. In the way that I don't get paid.

First the new Honda Shadow RS needs a redesign. I have never liked how Honda moved toward cruiser styles, and now the Harley Davidson Sportster. Although if the shoe was on the other foot, Harley Davidson would try to do the same thing to Honda. I feel that copying stifles creativity. I don't think Harley Davidson is innocent of copying and lack of creativity either. They regularly copy their old styles, because that's what sells. And it seems Honda has to do the same. So to show Honda how they could create a perfectly good bike that would be distinctive from the Harley Sportster but have more style, I did a little make-over.

For my first change, the exhaust goes from two mufflers to one, and I kept the line of the exhaust high from front to back. Of course this is going to cause all kind of heartbreak in the engineering department, as they have to worry about heat shielding, power output, noise etc. That's exactly why I declined a position in the engineering department. The Shadow RS looks better this way, and it does not look like the Sportster.

My other change was the passenger seat. I want either a real seat for the passenger, or I want nothing. I despise the bitch pads that Harley loves to put on their bikes, as it is subliminal male chauvinism gone wrong. So I fixed that psychological problem. Again it makes the Honda look more like a Honda, and look better at the same time.

The third and fourth details would not make the bike look better, so I didn't bother. It would make the bike work better to have bigger fenders, and a bigger gas tank, but I kind of like it the way it is in this picture, and I don't want to cause too many problems for the engineers.


Now to look at the Honda Shadow 750 RS compared to the Sportster and compared to my Vulcan 900.

One thing I have always liked about the Harley Sportsters is that they are about as close to an economical standard bike as Harley seems to get, especially with mid-mounted footpegs. The only problems they had were that (A) they were not made by Honda, and (B) small gas tank, (C) they looked like the back end was dragging on the road.

This Shadow RS by Honda is just about how I would change the Sportster if I could. The Honda also has water cooling, and three valves per cylinder. Both now have fuel injection.

Minuses for Honda are chain drive combined with no centre stand (which I don't like), and smaller gas tank.

On the plus side for Honda, higher seat height (better for me), about 60 lbs less, but a bit bigger size.

None of the differences would put me off getting the Honda instead of the Sportster, although they may be more important for someone else.

I was not able to confirm how bad the Honda's vibration would be, as it apparently does not have a counterbalancer or a rubber mounted engine. The Sportster has rubber mounting, and my Vulcan 900 has both rubber and counterbalancer. I am quite happy with the low vibration levels of my Vulcan.

I believe all three bikes (including the Vulcan 900) are in about the same price range.

Update: I have written another blog comparing the Shadow 750 RS to the 1969 Honda CB750 Four.
Copyright the Lost Motorcyclist