Did Somebody Need to Kill the Two Stroke? 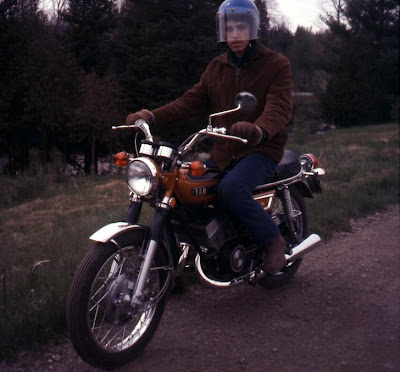 Does anyone still remember when Honda was the only Japanese motorcycle with a four stroke engine? All the rest were the infamous "two strokes". I have only ever owned one "two stroke" engine, and when I bought it, I knew nothing about it. Kind of typical of my motorcycle purchases. All done in too much haste, with lots of time to think about it afterwards.

I was actually looking for a Honda CB350, which of course would have been a four stroke like my first bike, the Honda CD175. Just bigger. Motorcycle sales were apparently booming in the spring of 1973, and the Honda dealer was sadly sold out of his fastest selling model. Being kind of short on funds, and not in the habit of buying stuff on credit, I decided to pass up on the bigger bikes that were for sale. But at the Yamaha dealer, there was a forlorn leftover 1972 model, the DS-7. It was a 250, if you looked close enough, you could see the difference (the 2 even looked like a 3 the way it was written on the side panel). I asked if they had the 350, and was told no, they were sold out. It seemed like my choice was limited, and I hesitated because I wanted something a bit more powerful than my 175. But the savvy salesman had an ace up his sleeve. In those days, they could let you take a test drive. So he rolled it out of the showroom, and gave me a helmet, and pointed me up the road. It was quite a rush to be back on any bike a year after selling my CD175. But then I turned the Yamaha onto a steep uphill road in Sherbrooke. Before I continue, let me state that we have no steep uphill roads in Kitchener. This particular road in Sherbrooke was challenging to my 56 Chevrolet, and a few times I had stalled going up it because I could not shift down to first gear, as there was no synchro on first, and I didn't know how to double clutch. I pretty much had to stop at the bottom and climb it in first. Which was why I avoided it. But here I was on a new motorcycle, and there was the hill, it was irresistible.

So I pointed it up the hill kind of like pointing a space shuttle at the moon, shifted down and gave it full throttle. Lucky it was not the Yamaha 350, or I would have found myself and my passenger lying at the bottom of the hill while the bike sailed over the crest 3 feet in the air. But this was only a 250, and thank God for that, because I was totally blown away at how we accelerated effortlessly up the very long and very steep incline to the top. I went back to the dealer and signed the papers for the bike. It was only $800 new.

A few days later, it was starting to dawn on me that this prodigious amount of power from a mere 250 was being made by an unconventional combustion process. Not exactly black magic, but something quite unheard of in usual American automobiles. It turned out it was a two stroke motor. Now what was this going to mean to me?

First, was the sound. It actually sounded at idle like it was rattling instead of purring. Maybe that was normal. Then there was the oil. Apparently I had to add oil to an oil tank every 600 miles or so, as indicated by the sight glass, or the engine would blow up. On the other hand, there was no engine oil to change, so that might be good.

As I looked more into the theory of the engine design, I found that the main difference was in the number of strokes. A stroke is defined as a complete one-direction motion of the piston in the cylinder. The most important stroke is the "Power stroke", where the piston starts at the top, and burning, expanding gas pushes it down with great force, creating power to push the motorcycle forward. In a four stroke engine, three other strokes are needed to set up a power stroke. One to push out the used up fuel, one to pull in fresh fuel, and one more to compress that new fuel just before the next power stroke. That all made sense to me even if it does not to you.

Now what does a two stroke do? As the name implies, it has only two strokes to do all the same stuff that apparently is needed in a four stroke. A brilliant idea, if you can do it, as it results in twice as many power strokes per turn of the crank. The way it is accomplished is even more brilliant, as it is done with far fewer moving parts than a four stroke. Once you understand it, it is simplicity itself. The understanding part can take a while though.

Whether you think it is simple or complex, it certainly is different, and lots of other issues come up. Like what about the oil pool in the crankcase? Well there is none. You mix oil into the fuel and that's what lubricates the crankshaft and connecting rods. A person familiar with car engines might wonder how this can ever work, but it does because all the bearings are ball bearings, which work well in mist of oil, fuel, and air.

Another issue you may not think of, with an air cooled engine, the piston and cylinder only have one stroke to recover and cool off before the next power stroke. So a common ailment of two strokes is overheating and "Seizing" meaning that the engine locks solid, the rear wheel too, and suddenly instead of just riding along, you are sliding down the road at the same speed with the locked rear wheel fishtailing about. And people wonder why I'm not scared that my Toyota throttle may get stuck under the floor mat.

When I returned my bike to the dealer for the 500 mile checkup, the mechanic informed me that these bikes were not designed for continuous high speed highway riding, and that I should stop every 30 minutes and let it cool off for 15 minutes before continuing. Advice that was totally ignored as I used to run with  full power up grades that were up to 20 km long, and quite steep in places.

My main problem was in the fact that two strokes are very sensitive to exhaust pipe shape and back pressure. And they put out a lot of soot, which coats the inside of the exhaust pipe, and begins to reduce performance within 10,000 km. I never even knew that exhaust pipes needed to be cleaned out on these things until I was stranded with a non-functioning bike in Moosomin Saskatchewan, and somebody suggested cleaning out the baffles.

The animated 2 stroke combustion cycle, I picked two that looked good, there are many worse ones on Youtube

A similar motorcycle to hear the distinct sound.

Top Picture: Me on my new Yamaha 250 in the spring of 1973
Copyright the Lost Motorcyclist