The BBC Looks at America 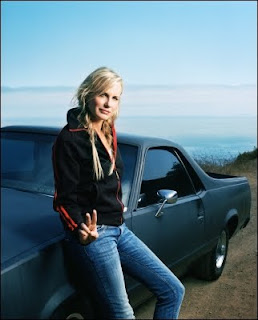 Can Obama Save the Planet?

I happened to catch the middle of this show last night, on the "Passionate Eye" on CBC. I was immediately interested by this travelogue style documentary, by British journalist Justin Rowlatt as he was travelling around the USA looking at their accomplishments (or lack thereof) in combatting greenhouse gasses.

While the topic was serious, Justin makes it go down easy with humour and observations. When it comes from a foreigner, it is like the show Mork and Mindy, except this time Mork is from England instead of outer space.

I first tuned in when Justin was looking at the wind farms of Texas, near Sweetwater. These are truly gigantic farms, with thousands of turbines, where here in Ontario, we may have only a hundred in one wind farm. I actually drove through these a few years ago on the way back from Mexico.

Justin was being driven around by one of the maintenance crew for the wind power company. I guess because Justin comes from England, he seemed to not notice the irony of driving around in a Hummer with the name of a wind power company on the door. Anyway, in North America it might be considered a bit odd, because the Hummer is the vehicle of choice for the anti-global warming people.

The next bit was in California, with movie star Darryl Hannah (The mermaid in Splash!) showing her veggie powered Chevrolet El Camino. Here's where the picture comes from. So far, I find this an entertaining TV show.

But then it shockingly followed the El Camino bit with a segment from West Virginia. Justin went on a radio show as a guest, and was yelled at, laughed at, and interrupted for saying even the most moderate things on the subject of greenhouse gasses. Then he followed it up with other snippets where various locals were explaining to him how it was going to come to bloodshed, and another about how Obama was like Big Brother in 1984.

To me this was a bit like watching the episode of Seinfeld where Jerry uses a chainsaw to remove Elaine, Kramer, and George's heads right near the end. OK so maybe there was never a episode like that, but at least you get the idea of how disturbing the change of pace was. Normally I would switch channels, but Mary Ann was watching and I think it is rude to change channels on a show unless I'm alone, even though I have the remote in my hand.

To Justin Rowland, and to the British audience, of course all this is just fun and games. The British take for granted American stupidity, and like Steve said as a comment on my blog "When is too much mud enough?" he said "Makes me glad to be English". But I have friends and relatives who actually think along the same lines, and they feel free to tell me about their ideas. So this documentary was as shocking to me as the imaginary Seinfeld episode.
Copyright the Lost Motorcyclist