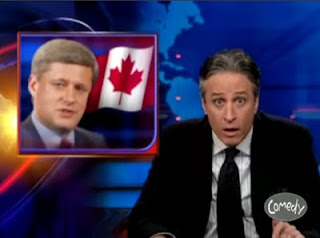 George Monbiot wrote a column in the Guardian: "Canada's image lies in tatters. It is now to climate what Japan is to whaling"

"The tar barons have held the nation to ransom. This thuggish petro-state is today the greatest obstacle to a deal in Copenhagen"

In the article George did not refer to our Prime Minister Stephen Harper, and I believe Stephen is really at the centre of this controversy. Of course, Canadians are going to be judged by the actions of our leaders, and I understand that most people don't want to know about our internal politics. And admittedly there are quite a few right wing conservatives living in Canada who agree with Stephen Harper's actions.

But this tar sands situations more than anything, illustrates the powerlessness of any country in the face of large multinational corporations. In this case Canada, because as luck would have it, the tar sands are here.

Let me just recap a little history for perspective. Harper's party started as an extremist right wing anti-immigrant party called the Reform Party in the 1980's. They were a fringe party from the start and held only a few seats in or around Alberta (tar sands area). Later they tried to gain power by changing their name to the Alliance party but nobody was fooled. With the beginning of the Iraq war, and Canada's stand against it (by the ruling Liberal Party) the stakes were upped again, and the combined weight of US public criticism, dirty tricks, plus corporate money forced the remaining right wing parties including the old Progressive Conservatives, to join the newly named "Conservative" party. . Under the Conservative party name, and with a new and inoffensive official platform, the Conservative party finally found enough respectability to eke out a minority government. This was against a divided left wing split among four parties.

Stephen Harper became our (minority) Prime Minister March 2004. His first agenda was kissing up to George W. Bush in any way possible. Given that he was leading a minority government, and had not mentioned Iraq in his campaign, his only avenue of action was relocating Canadian soldiers already in Afghanistan, to the most dangerous part of that country. The resulting high rate of casualties found favour with the Bush administration.

Not too long after, the Harper agenda changed. Bush's days were numbered, the wars in Iraq and Afghanistan were turning into quagmires. But the oil companies still needed Canada not only for access to the tar sands, but as an international political face for their corporate interests.

In December 2008, with a new green leader of the Liberal party, Stephan Dion, all the opposition parties combined to force a non confidence motion, with the goal of ousting Harper and forming a coalition government under the Liberals. Knowing this was coming, Harper went to the Governor General who made the unusual decision to prorogue parliament and effectively squashed the political tactic. So we still have Stephen Harper, who has learned that politically he can do just about anything he wants if it does not require an act of Parliament. Such as being a thuggish tar-baron on the world stage, which does not in fact require an act of parliament. But unfortunately drags the good name of Canada down with it.

Image: Jon Stewart on "The Daily Show" in mock horror at the shenanigans of Stephen Harper.
Copyright the Lost Motorcyclist