Propaganda: This is How Nazis Promoted Genocide

It seems a lot of people wonder why the Germans went along with the genocide of the Jews. Well other than some inherent racism, which seems almost unavoidable even in multicultural societies, there was a lot of Nazi propaganda driving the hate. There was also the Nazi equivalent of 9/11, where a Jew was found guilty of burning down the German parliament buildings. And even worse, the Jews were said by the Nazis to be the ones who betrayed Germany in World War 1.

Here is an example of Nazi propaganda against Jews, saying if you projected into the future assuming a rate of 4 children per Jewish family vs. 2 children per white German family, that the Germans would be outnumbered and in fact become insignificant in a number of years. Here is a chart that was used by the Nazis to prove their point. 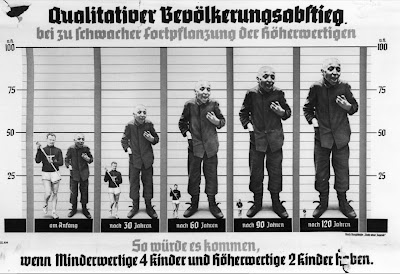 Roughly translated, it says that "lower" people, having 4 children per year, would multiply as represented by the growing Jew in 30, 60, 90, and 120 years in the future. (You can enlarge the picture by clicking on it) Thus they would outnumber the "higher" people by the amount illustrated by comparing the size of the Nasty Jew to the German Olympic athlete. To be honest, they did not pick a particularly attractive Jew either. And although there was no actual mention of Jews in the poster, it was not hard for most Germans to connect the dots. Possibly the Nazis were thinking of recycling the posters to some other cause once the Jews were eliminated, otherwise I'm not sure why they were so coy about naming the Jews in this propaganda piece, but that's often how propaganda is done. Very subtle in some ways, over the top in others. Anyway it's all quite scientific and mathematical. But also misleading. I will point out the propaganda trick of using a three dimensional picture in a one-dimensional chart, where height represents numbers. But psychologically, we see a three dimensional picture, where it's actually the comparative weight that we remember. And weight is the cube of the height. Whether you understand the subtle trick or not (most people don't, apparently), you do get influenced by it. These days, even if we still don't understand the tricks, we can at least understand the ultimate repercussions of this propaganda.

Do We Have the Same type of Nazi Propaganda in Canada?

Now let me hold up a mirror to look at some of the hate propaganda going around in Canada today about Muslims. Mark Steyn has written about the high reproductive rate of Muslims compared to the low reproductive rate of "white cultures". That's really about the only substitution you need to make to have exactly the same propaganda as the Nazis used on the German people. If we learned anything from history, we should learn that Nazi hate propaganda is wrong. Here I photoshopped the same Nazi era chart to depict a Muslim instead of a Jew, and I hardly had to change a thing. (You can enlarge the picture by clicking on it) 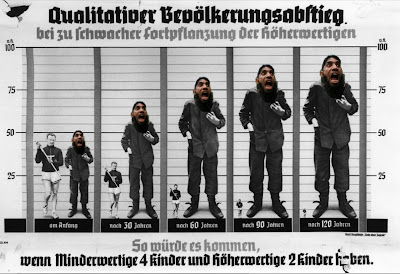 I actually hope that this picture does not give Mark any ideas about how to improve his propaganda.

I find it amazing that some of Mark Steyn's most ardent fans deny he has ever written anything about killing the Muslims, so here are two quotes and the references. By the way, it really does say something about the power of clever propaganda that people are reading this stuff avidly and are not consciously aware of what they have read. That probably explains a lot about how the propaganda worked in Germany too. Even today people still deny the holocaust. The propaganda apparently sneaks into your brain and lodges somewhere in your subconscious mind like a sleeper cell.

“In the thirty years before the meltdown, Bosnian Serbs had declined from 43 percent to 31 percent of the population, while Bosnian Muslims had increased from 26 percent to 44 percent. In a democratic age, you can’t buck demography—except through civil war. The Serbs figured that out—as other Continentals will in the years ahead: if you can’t outbreed the enemy, cull ’em.”

The above call to action is reasonably clear considering the genocidal implications, but Mark argues that he is not "advocating", which would be illegal, he is "predicting", which is legal. In Canada anyway.

"Even if you regard Islam as essentially incompatible with free societies, the slaughter required to end it as a force in the world would change America beyond recognition. That doesn't mean that, a few years down the line, if some kooks with nukes obliterate, say, Marseilles or Lyons that the French wouldn't give it a go in some fairly spectacular way. But they're unlikely to accomplish much by it, any more than the Russians have by their scorched earth strategy in Chechnya."

This one is written so ambiguously that I can't tell whether Mark thinks that the change to America brought about by slaughtering the Muslims (if they decide to do it) would be good or bad. If liberals disappeared entirely, that would also change America beyond recognition. Would Mark approve?
Copyright the Lost Motorcyclist