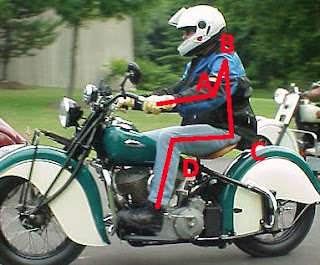 Many riders may settle on a riding position dictated by the position of the controls on the bike as they purchased it. But many also adjust the bike to get the position that suits them best, usually by adjusting the handlebars. But ultimately almost any position can be achieved by replacing handlebars, or moving the seat or footpegs. Sometimes the seat and floorboards (if equipped) are large enough to permit some movement while riding. Also, alternate footpegs are sometimes mounted on the bike, known as "highway pegs", to allow a different riding position from time to time. Factories do not mount these, as it is considered unsafe to move your feet away from the controls.

The picture is a rider on an old Indian, probably from the thirties, although you can tell from the clothing and helmet that this a newer picture. This was the typical riding position from that time. It was popular then because people rode long distances on bumpy roads, and wanted to be comfortable and remain in control of the bike. Very admirable goals, I might add, and we could do well to continue with those aims today.

But modern roads are much smoother, and almost always always paved, so retaining control is easier. Also bikes these days do not wobble, throw you off and crash, so you don't need to maintain a firm grip on the bars and seat the way the old timers did. Today people are free to experiment safely with weird or "cool" riding positions that are not quite optimum.

Looking at the picture, you can see that I have made five lines and labelled four angles, these are the critical angles and lines of the riding position. In the classical position of the old days (which mostly this is), the forearm is almost horizontal, but angles a bit down toward the wrists.

At A there is a relaxed bend of about 120 degrees, and about a 30 degree angle at the shoulder (B)

The back is almost vertical. In this case it is a little forward, to counteract the wind, because there is no windshield. It could be more vertical if there was a windshield to take the blast of air. In the thirties, I don't think riders ever had backrests, probably due to the bumpy roads that would hammer their kidneys if a solid backrest was attached.

Angle C is about 90 degrees, and was sometimes up to about 110 degrees. In this picture, the rider has his foot on some control (maybe the brake, but back then, the clutch was sometimes located there), so he has reduced angle C to about 90 degrees. Today the fashion is to have less than 90 degrees here, with the seat is lowered as far as it can go. However the lower seat leaves your derriere at the mercy of bumps, as it is harder to stand on the pegs from the low seat. But like I said, we have no bumps today, and even if we did, there are now shock absorbers on the wheels (note this bike has either a rigid rear, or a plunger suspension, and the seat is on a post) and furthermore we don't actually ride long distances, that's what pickup trucks are for.

Finally, the shin (line from knee to ankle) was usually straight down, giving a relaxed angle at the knee (D) of about 90 degrees. And with this Indian, there were floorboards to allow some movement back and forth.

This classic riding position was pretty much ideal for riding a bike at normal speeds comfortably, while remaining in full control, and is still found on police bikes today.

There are other riding positions suitable for different riding styles. Such as road racing, where you need a position where you are leaned forward, and with your feet up near the seat and a sharp knee angle, to prevent getting your toes getting caught when leaning for corners. Sport bikes adopt positions similar to race bikes.

On custom bikes and choppers, it is fashionable to have knees and elbows straighter than in the old days, and a lower seat height is normal.

You can probably tell from the way I present the topic that I wish bikes were set up like they were in the thirties, although with some work, you can change it yourself. But some bikes are harder than others to make changes to.
Copyright the Lost Motorcyclist