Things We Shouldn't Have Done 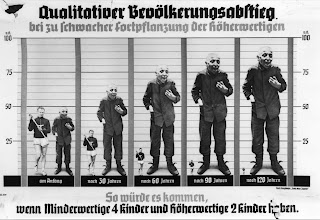 Two things we shouldn't have done in the twentieth century. Out of what could have been the worst hundred years of human existence, picking just two might have been hard, but it happens there are two standouts. Eugenics and atomic power.

Either one, in theory could have been a force for good, in the hands of intelligent governments.

The aim of eugenics, was to eliminate the unfit and improve the human race through selective breeding. But instead it brought on a mania for slaughtering anyone who was a bit "different".

The development of atomic power could have solved our energy needs, but instead it brought a world wide proliferation of atomic bombs, reactor meltdowns, and nuclear waste that will last 40,000 years. More, if we set the rest of those bombs off.

The Germans used eugenics as one of the excuses to eliminate Jews (and others). After they lost the war, eugenics fell into such disrepute that today we have some protection for the rights of the unborn, and taboos on the building of gas chambers for "non perfect" people. I just wish we could completely get rid of the fundamental racist ideas that drove the WW2 genocide.

Because the American side won the war, there does not seem to be the same aversion to building atomic bombs. Quite the contrary, atomic bombs seem to boost national pride.

There was an interesting, if not poetic, connection between eugenics and atomic power. Jews driven from Germany by threats of eugenics, were the ones who first unlocked the power of the atom for America instead of Germany.

My own conclusion is that humankind is not really ready to handle atomic power or eugenics. So we should try to stay away from them. It's not so much a matter of intelligence, because any one single human being, of normal intelligence, and without external pressure, could probably figure out how to use these things positively. But in large civilizations, we have politics, religion, greed, fear and hate clouding our collective judgment.

I like to think of it this way. It would be a bad idea to give a bunch of baboons machine guns and hand grenades, simply because they would not use them wisely. Lack of intelligence, you might say. Individually humans are pretty smart, but organized in large groups they sometimes make worse decisions than baboons. Sorry people, if you find that insulting. It's about the only logical conclusion I can come to. And in the case of any fundamentalists who do not believe in evolution, no offense was intended. I did not advance this argument to support the theory of evolution. (which happens to be at the root of eugenics)

OK people, what have we got for the twenty-first century?

Picture: Nazi eugenics propaganda, strangely similar to "Muslims will take over the world" propaganda being spread about today by Mark Steyn and MacLean's magazine. Except it was about Jews instead of Muslims. I found it in this blog.
Copyright the Lost Motorcyclist