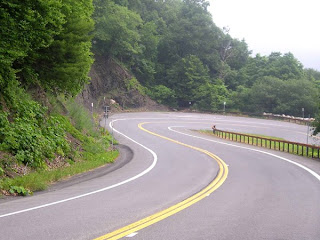 I first learned to drive a car on twisting mountain roads. That's the type of road that people of southern Ontario call "scenic". When I was young, I always thought of them as "normal". My father had a habit of cutting corners, which means in a sharp left hand curve, he would swing over the double yellow line to clip the apex on the shoulder of the oncoming lane - if no cars were coming. This was always accompanied by my mother yelling. Once we were doing such a move in relative safety, as we did have a good view of the road ahead. But this time we had an impatient driver behind us, which to be honest was extremely rare with my father driving. And this time I think he was also trying to block this person from attempting to pass us on the curve by cutting the corner all the way to the left hand shoulder, when suddenly the other car blasted by on the right. Well that's the type of creative driving you will sometimes find in the province of Quebec. These days, they have straightened out many curves (including that one, sadly) and they also have provided emergency runoffs and brake testing areas on the downhills. If you don't have emergency runoffs these days, you are not really on a true mountain highway.

When I got older (28) I had as much trouble learning to drive in busy southern Ontario, as Ontario drivers have in adapting to mountain roads.

Mary Ann is from Southern Ontario. Her home town of Mount Brydges does not have any mountains. Or bridges for that matter. On one vacation, we were driving our Honda Civic through West Virginia, which is mountainous. Mary Ann was driving and this was an unfamiliar situation to her. I'm not saying she didn't know how to stay on the road, just that she did not have years of experience with all the things that can happen.

Mary Ann decided that we could save gas if she put it in neutral coming down the hills. I had never seen anybody drive like this, but I didn't object too much, as there are lots of things she does that I have never seen before. But when we got to her sisters, I noticed the spokes of the front wheels were black instead of their normal silver. It turned out to be dust from the brakes. Then on the way home, I suggested she forget about the saving gas and just leave it in gear. It didn't help, and before long we could smell brakes burning. Actually a familiar smell in mountain communities on truck routes. We stopped and got out. The brakes had kind of seized, so the car would not roll freely. We cooled them off with water from a mountain stream and that seemed to release them. Mary Ann asked if we should call a tow truck. I thought that I would be able to just drive the car without seizing the brakes again. The main problem was the long downhills with hairpin curves. That was where you theoretically needed brakes. So I put the car in a lower gear and drove down the mountain more slowly, and I took the curves about as fast as I dared, without touching the brakes. We made it back to the next town without the brakes seizing again, and on level ground I started using the brakes without further problems. We ended up driving all the way back to Kitchener on those brakes, but it cost up $450 to replace the pads and some other stuff when we got back home. I am not aware of how much gas we saved, though.

A lot of people do not realize how hot brakes can get coming down the mountain grades. It can boil the brake fluid, which expands and will cause pressure on the pads even without your foot on the brake. This is not good for the brakes of course, but you can stop (I hope) and cool them off with water if you need to. The important thing to remember is to not be dragging the brakes all the way down the mountain. Use a lower gear if necessary. We never had this problem much in Quebec, as they use very few hairpin turns in the mountains. Instead of zig zagging down the hill, they usually make the road straight down with a steeper grade. You just let the car speed up and the wind and engine compression alone acts to slow you down. But if you try to take it slow by using the brakes you may burn them up.

Picture: I assume West Virginia, because that's what I was Googling.
Copyright the Lost Motorcyclist